The clashes and executions are focused, they have been a no man’s land for years

In recent years – marked by the change of power, confinement, and sustained rise in death figures from coronavirus – nine entities in the country have become cemeteries for organized crime.

There, the deaths happened by the hour. There were massacres, shootings, beheadings without restraint. Hundreds of charred, dismembered, bagged or buried bodies appeared.

An analysis by México Evalúa indicates that in the period from December 2018 to July 2020, homicides were concentrated in five “Hot Zones” of the country: Chihuahua-Durango-Sinaloa; Zacatecas; Colima; Guanajuato-Michoacán; and Morelos-Guerrero. 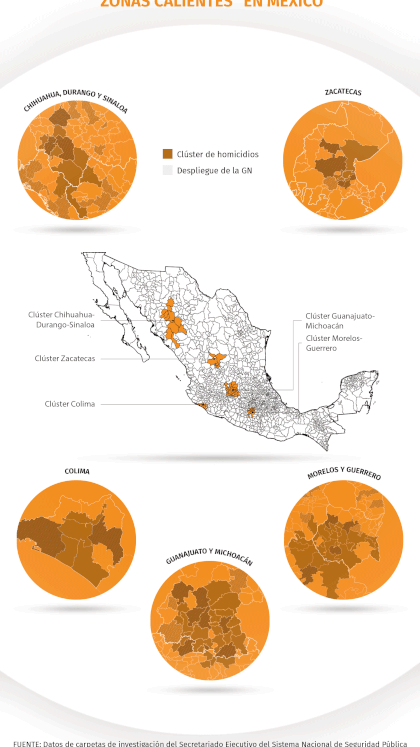 The hot spots (or hot zones) in the country (Map: Infobae México)

In the aforementioned period, more than 4,491 murders were registered in the largest source of alarm in the country: the Guanajuato-Michoacán area – disputed mainly by the Jalisco Nueva Generación Cartel, Santa Rosa de Lima, and the United Cartels -, and in where the National Guard has a permanent presence in 22 percent of the municipalities that make up the region.

Morelos-Guerrero is the second hot zone in the country. It is made up of 28 municipalities and covers four entities: 19 municipalities of Morelos; six from Guerrero; two from the State of Mexico and one from Puebla.

3.2 percent of the homicides (1,604) that occurred in the country during December 2018 to July 2020 occurred here, as a result of the wars to control drug dealing.

The third place on the list is Colima. There, too, the CJNG fiercely maintains a war, accompanied by executions and recorded torture against the Sinaloa Cartel. According to México Evalúa, 95 percent of homicides are concentrated in six municipalities of this small entity.

Zacatecas is on the list with 663 homicides associated with organized crime. According to the research center, the municipalities identified as “hot spots” are Río Grande, Villa de Cos, Pánuco, Fresnillo, Zacatecas de Guadalupe, where there is only the presence of 1,558 members of the National Guard.

The hot zones in Chihuahua-Durango-Sinaloa are distributed as follows: eight in Chihuahua, two in Durango, and one in Sinaloa. Mexico Evalua points out that 362 homicides occurred in these regions, which may seem few compared to the previous entities, but given the size of its population, it has very high homicide rates.

Chihuahua is the epicenter of a dispute for control of retail drug outlets between the Juarez Cartel and the Sinaloa Cartel. The border city of Ciudad Juárez has been plagued for years by violence and a femicide crisis that has spanned almost three decades.

In the Chihuahua-Durango-Sinaloa region, organized crime is at the forefront, because the transfer of National Guard forces is hampered by the large territorial extension of the municipalities and their complex relief.

Mexico registers 19,579 intentional homicides so far in 2020 (from January to August), according to official data.