Temperatures will fall in the southeast, north and center of the country

November is getting closer and closer and this Thursday, its arrival will be felt in much of the country.

According to the National Meteorological Service (SMN), the Cold Front Number 9 will extend throughout the day from the northeast of the Gulf of Mexico to the southeast of the Republic, where it will leave torrential rains, between 150 and 250 liters per square meter.

“The associated cold air mass will cover most of the country. It will promote a very cold environment with possible morning frosts on the Mesa del Norte and the Mesa Central, as well as possible snow or sleet fall on the mountain peaks with altitudes above 4,000 meters in the east of the country (Cofre de Perote, Pico de Orizaba and Sierra Negra), “the climate agency of the National Water Commission (Conagua) indicated in its report.

At the same time, a significant mass of moisture will enter from the Pacific Ocean, causing storms in the South and Central Pacific regions. Due to the presence of the aforementioned phenomena, rainfall is expected in at least 21 states of the country.

– Intense rains with torrential punctual rains (from 150 to 250 liters per square meter) in: Oaxaca, Veracruz, Chiapas and Tabasco.

– Very heavy rains with intense punctual rains (from 75 to 150 liters per square meter): Puebla and Campeche.

– Intervals of showers with strong punctual rains (from 25 to 50 liters per square meter): Tlaxcala, Guerrero, Yucatán and Quintana Roo.

The SMN warned that all this rainfall could be accompanied by electric shocks, hail falls and strong gusts of wind. 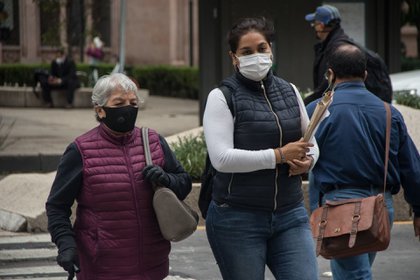 In addition, they will also be low in the mountainous areas of Baja California, Zacatecas and the State of Mexico, with records that would fall to -5ºC. In high areas of Tlaxcala, Puebla and Veracruz, they will range from 0 to 5ºC.

On the contrary, the highest temperatures are expected in Michoacán and Guerrero, and will move between 35 and 40ºC.

From the SMN they reported that Cold Front 9 will also cause a “North” event, causing very strong gusts of wind, of 70 to 80 kilometers per hour in the Isthmus and the Gulf of Tehuantepec.

Regarding maritime conditions, they will be adverse in the Gulf of Tehuantepec, the coasts of Tamaulipas, Veracruz, Tabasco and Campeche, with waves of 2 to 4 meters high.