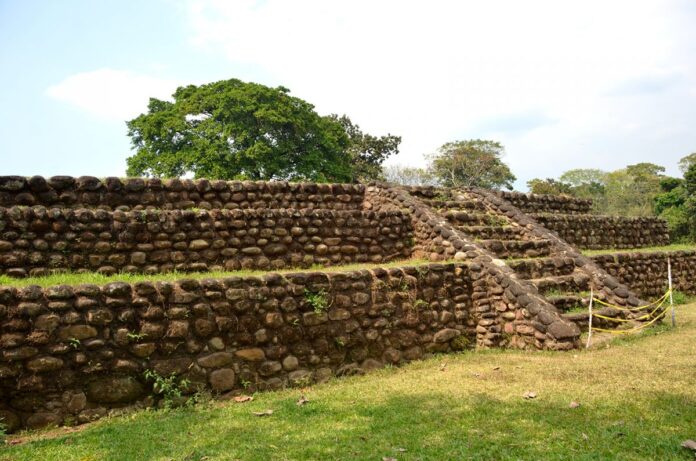 The construction works in the archaeological zone of Izapa have already been suspended, informed an official of the INAH.

Construction workers destroyed mound number 46 of the archaeological zone of Izapa, in Chiapas, which began its development in the 15th century BC and corresponds to the Mixe-Zoque culture, with the purpose of building a subdivision, denounced members of the committee of conservation and the city council of Tuxtla Chico.

With heavy machinery, on Thursday morning, several people arrived at the archaeological zone located in front of the Tacaná volcano, in the municipality of Tuxtla Chico, on the border with Guatemala, to destroy mound number 46, one of the largest in the Acropolis, located 4 kilometers from the Suchiate River, which serves as the division between Mexico and Guatemala.

The purpose was to subdivide a property located in the archaeological zone to build a subdivision.

At the moment the backhoe had entered the place, no authorities appeared, to prevent the destruction from being consummated.

As a consequence of the machinery entering the archaeological zone, “the damage to the historical and cultural heritage is unquantifiable,” declared Reidil Colombo Ramírez, president of the Izapa conservation committee.

INAH is already taking action on the matter

An official of the National Institute of Anthropology and History (INAH) announced that the suspension of the construction of the subdivision was requested. “The works were stopped,” he said.

He added that a lawsuit was also filed with the Attorney General’s Office (FGR) , for the damage caused to the archaeological site.

And a report will be prepared with the presence of experts and archaeologists, to know the damage in the archaeological zone and only then know the magnitude of the damage.

The INAH Chiapas sent Marcos Santos, in charge of the security of archaeological zones in the state, to lead the actions that will be taken to punish people who intend to divide the federal property.

The mayor of Tuxtla Chico, Deysi González, denied that the city council has granted permits for the subdivision of the property and proof of this is that until this Friday no one has shown if they have that document in their possession.

In a statement, the city council established that “in compliance with the law and regulations in force, the authorities presented themselves to the archaeological zone of Izapa, to avoid construction on these lands, protected property because it is the patrimony of the nation.”

He added that the Municipal Civil and Legal Protection directorates, in coordination with federal authorities, this Friday “carried out the closure of subdivision works in areas of the archaeological zone of Izapa.”

He announced that the Ministry of Culture of the federal government and INAH filed a lawsuit against who or who is responsible for these events.

According to the Federal Law on Monuments and Archaeological, Artistic and Historical Zones, whoever damages, alters, or destroys an archaeological, artistic or historical monument, “will be imposed a prison of three to ten years and a fine up to the value of the damage caused”.

The state in which the archaeological zone of Izapa is located

According to archaeological studies, Izapa has 13 large plazas, between mounds in the shape of a cross, which are located in front of the Tacaná volcano, more than 4 thousand meters high and one of the most important in Guatemala.

It is now known that about 10,000 people lived in Izapa and among the agricultural work, cocoa cultivation stood out.

The researcher Herbert Castellanos said that “the square of group H is the navel of Izapa and is the place where there were some winter water dumps, which the scholars of the place know as the Los Filines Landfill”.

“This landfill has been buried by the work of heavy machinery, which also destroyed part of the pyramidal structures, this with the consent and approval of the municipal authorities, who in principle even sent patrols and elements of the Municipal Police to take care of the destructive work of machinery “, explained the researcher who has carried out independent archeology studies in Chiapas, Tabasco, Oaxaca, Veracruz, Yucatán, and Guatemala.

“We make an energetic protest for the destruction of this treasure of Chiapas, of Mesoamerica, of the world, where we find the testimony of the ancient Mixe, Zoque, Olmec, and Mayan cultures since it is a place developed by humans for at least 3,500 years ago and it has been a deified place for centuries, whose main wealth was and is cocoa, “he added.

The city of Izapa is contemporary with San Lorenzo, in Veracruz and La Venta, Tabasco, but scholars have not been able to confirm at what time its fall occurred.

Izapa derives from the Nahuatl Atzacua, which could mean “reservoir of water”. International visitors arrive in Izapa who arrive on cruise ships from all over the world to Puerto Chiapas, also known as Puerto Madero and part of the coffee tourist route.