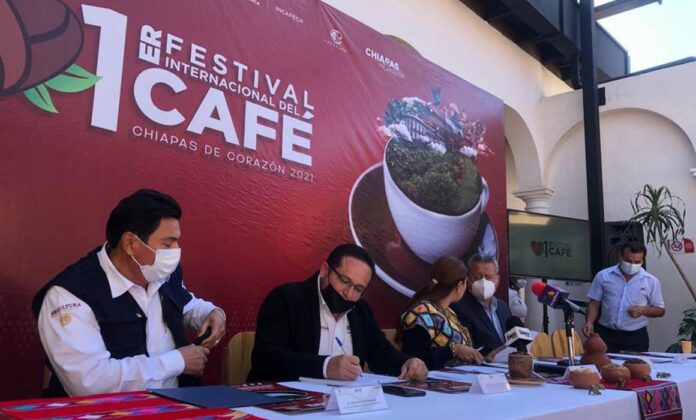 With the aim of closing technological gaps, improving the resilience of coffee plantations and strengthening and diversifying the aromatic markets, the governments of Mexico and Chiapas will hold the first International Coffee Festival: Chiapas de Corazón, which will feature the participation of national and international institutions and organizations, specialists, researchers and guests from 12 countries.

The meeting seeks to position the coffee of Chiapas and Mexico in the eyes of the world; strengthen current commercial channels in traditional markets of North America and Western Europe and diversify new commercial channels in emerging markets of Eastern Europe, Asia, Australia, and New Zealand, and establish science and technology transfer links at the service of small producers from Chiapas and Mexico.

As part of the promotion strategy for this event, the Secretary of Agriculture, Livestock and Fisheries (SAGYP) of Chiapas, Zaynia Andrea Gil Vázquez, presented the 1st International Coffee Festival “Chiapas de Corazón “, which will be held from November 24 to 26 at the facilities of the State Center for Innovation and Technology Transfer for the Development of Chiapaneca Coffee Growing (CITYCAFÉ).

The municipal president of San Cristóbal de las Casas, Mariano Alberto Díaz Ochoa, warmly welcomed the attendees, all involved in the coffee industry in the state.

Before municipal authorities, legislators, producers, and cooperatives summoned to the press conference, the head of SAGYP pointed out that Chiapas is the main national coffee producer with 41 percent of the volume.

She highlighted that coffee growing in the state is developed in 88 municipalities, grouped into 13 coffee-growing regions, where 115 brands of Chiapas coffee have been identified, of which 92 are conventional coffee and 23 organic. Hence, he said, the importance of promoting the Festival for the benefit of Chiapas society.

The state official stressed that the organization of the festival derives from instruction by Governor Rutilio Escandón Cadenas, taking into account the importance of coffee for the entire state, given that 183,761 producers participate in the activity and one million people obtain income from the grain value chain.

He also referred to the relevant role that the recently inaugurated CITYCAFÉ will play in the scientific, cultural, and community development of Chiapas grain.

Accompanied by the person in charge of the General Coordination of Agriculture of the Secretariat of Agriculture and Rural Development, Santiago Argüello Campos, who attended with the representation of the secretary Víctor Villalobos Arámbula, the head of the SAGYP announced the relevant activities of the Festival, such as the five outreach panels, various workshops, and business activities.

All of them are programmed to link Chiapas aromatic producers with marketers, importers, and industry experts who will come from different parts of the country and abroad.

He said that twelve countries were invited through their embassies, in order to promote Chiapas coffee in those destinations and the community that is involved in the grain value chain in those nations is expected to participate.

The coordinator Santiago Argüello highlighted the importance of carrying out this first festival around coffee and the positive effects it will bring to Chiapas and Mexico.

He referred to the objective of the festival to bridge technological gaps, improve the resilience of coffee plantations and contribute to strengthening and diversifying the current and potential markets of the aromatic from Chiapas and Mexico, addressing those consumers who value the efforts of coffee-growing families to produce a aromatic of high quality, innocuous and produced under good agricultural practices and wet processing and always contributing to preserve the ecological processes necessary both for the preservation of biodiversity and the quality of the grain.

For the federal government, he assured, coffee is a priority crop and, therefore, implements programs and actions for its comprehensive care, offering figures that demonstrate the relevance of aromatic care for agriculture with more than 106 thousand small beneficiary producers in the entity and with an investment of more than 658 million pesos, through the Undersecretariat of Food Self-Sufficiency, and of which 17 percent goes to 19 coffee-growing municipalities served by the Representation of Agriculture in the District of San Cristóbal de houses.

He referred to the topics and the panelists who plan to participate, where groups from different parts of the world are represented, such as the International Coffee Organization (OIC), the Inter-American Institute for Cooperation on Agriculture (IICA), the Regional Cooperative Program for the Technological Development and Modernization of Coffee Growing (PROMECAFÉ), the Alliance for Coffee Excellence (ACE), the Colegio de la Frontera Sur (ECOSUR), the Autonomous University of Chapingo (UACh), the World Coffee Research (WCR), the Costa Rican Coffee Institute (ICAFÉ), CIRAD-France and the Association of Specialty Coffee of North America and Europe (SCA), among others.

Argüello Campos recognized the commitment shown by the state government in organizing this unique festival of its kind and which is being of interest to the coffee community in the country and in the world.

Alfredo Zamarripa Colmenero, Coordinator of Research, Innovation and Linkage of the National Institute of Forestry, Agricultural and Livestock Research (INIFAP), expressed the interest that the festival has aroused in the academic community and the challenges faced by the sector worldwide, such as the case of climate change, profitability and productivity.

The secretary for the Sustainable Development of Indigenous Peoples of the state government, Emilio Ramón Ramírez Guzmán, recognized the organization of the International Coffee Festival, given that more than 60 percent of the producers are of indigenous origin and the grain is part of the essence of the original peoples of the state.

In this scenario, he invited local authorities to promote and encourage indigenous producers to attend the Festival.

Antonio Noguera Zurita pointed out that the festival is a strategic action to accelerate the economic reactivation in the state and will translate into income for Chiapas families.

Deputy Mario Humberto Vázquez López, president of the Coffee Commission of the local Congress, offered the support of the Commission in the festival and in actions that benefit producers.

Coming from the San Jerónimo Bachajón ejido, Miguel Gutiérrez Solórzano, representative of a Kapheltic Cañada coffee cooperative society, underlined the importance of the event, which will allow authentic producers to bring their coffee directly to the consumer’s cup, for the benefit of all.

The municipal presidents of Ocosingo, Gilberto Rodríguez de los Santos, and of Chicomuselo, Jorge Martín Sepúlveda Morales, recognized the effort that federal authorities are making to promote the grain of Chiapas throughout the world, which is the livelihood of families in practically all regions of the state.

The presentation was also a framework for the secretary Gil Vázquez to announce the calls for the children’s drawing contests “Growing up with forests and Coffee”, painting “Inspired by Coffee” and the short film “Con Sabor a Café”. as well as the promotional videos of the International Festival.

The official reiterated her gratitude to the municipal presidents and producers for their support in making synergies with state and federal institutions around the festival.

He detailed the cultural and artistic activities that will take place within the framework of the Festival, such as the participation of the Chiapas performers Arturo Aquino and Raúl Ornelas, the marimba from the municipalities of Tuxtla Gutiérrez, Ocozocuautla and Tonalá, and the group of dancers from the Coiteco – Chores Carnival, among others, whose purpose is to show the cultural richness and joy of the people of Chiapas.

The press conference was attended by officials from the three levels of government, producers, cooperative societies, academia and business organizations.