Police elements of the force and reaction group of the Secretary of Security and Citizen Protection evicted residents at the toll booth on the Chiapa de Corzo road to San Cristóbal de las Casas this Friday afternoon.

Apparently, it was the inhabitants of the municipality of Oxchuc who arrived at the edge of 10 o’clock in the morning and took control charging the amount of 100 and 200 pesos for each passage of vehicle to circulate.

After a police command spoke with the demonstrators, they remained aggressive and reluctant to give instructions, so after running out of time to vacate the place they did not move.

The police elements organized themselves with their acrylic equipment and tear gas guns, they began the operation to recover the road , after 10 minutes of confrontation with the protesters who threw stones and sticks, they were reported and evicted.

According to the data collected, the people stated that they demanded that the Municipal Government deliver 40 sheets of the Development Planning Committee (COPLADEM) program, since in their town they were only given 10, so they ask that they be given give their due.

Inhabitants of Oxchuc are evicted from the toll booth

At least 29 people were arrested this Friday afternoon after the confrontation between riot police of the Secretary of Public Security and Citizen Protection during the eviction of the toll booth on the Cuota Chiapa de Corzo highway to San Cristóbal de las Casas.

According to data collected, after the eviction, the police elements were deployed in the vicinity of the toll point, managing to capture 29 people who were hiding in the brush. 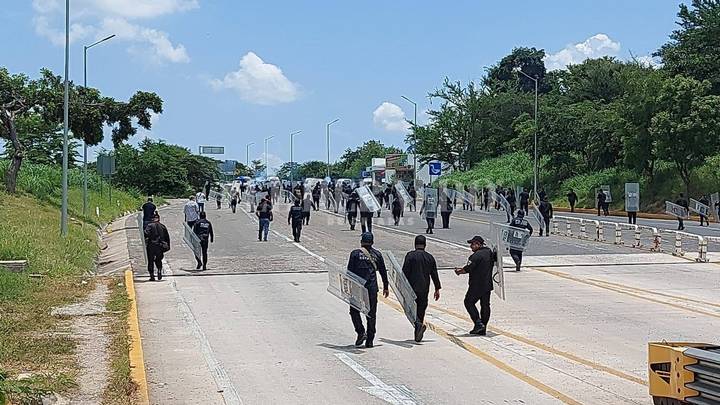 Police elements evicted the people who had taken over the toll booths / Photo: Hugo Sánchez | The Herald of Chiapas

The detainees were put on a police truck and transferred to the public ministry in turn in the capital of Chiapas to answer for their alleged acts.

According to the last congressional reform in the Law of General Communication Routes, anyone who blocks booths or whoever partially or totally restricts the transit of means of transport that circulate through the general communication routes.