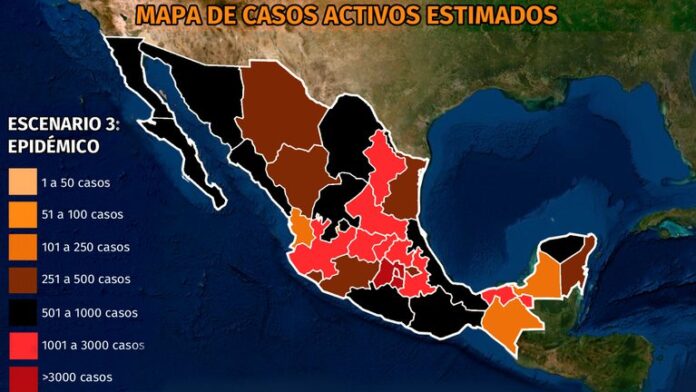 Mexico reached 2,038,276 accumulated cases of COVID-19, after registering 7,785 new infections in the last 24 hours; Likewise, deaths caused by complications of this disease increased to 179,797 after reporting 832 deaths the previous day.

However, there are also 1,590,696 people who have recovered and obtained medical discharge, so that the corresponding curve showed a decrease of 13% during epidemiological week seven, while the curve of estimated cases (sum of confirmed and suspected infections) at the national level it fell by 20% in the same period.

On the other hand, during the press conference to report on the progress of the disease in Mexico, Dr. Christian Arturo Zaragoza Jiménez, director of Epidemiological Information, announced that 56,533 people ( 3% ) have presented symptoms in the last 14 days, for which they are considered active cases and can contribute to the spread of the SARS-CoV-2 virus among the rest of the population, as long as they do not comply with all sanitary measures.

In this sense, according to the epidemiological document, Mexico City and the State of Mexico are the entities with the highest number of active cases, followed by Guanajuato, Querétaro, Nuevo León, Puebla, Jalisco, Tabasco, Morelos, and San Luis Potosí than together they account for 77% of active cases in the country.

This is reflected in the colors of the epidemiological traffic light that will remain until this February 28, where Guerrero and Guanajuato are the only entities in red (maximum risk); Campeche, Baja California, Sonora, Chihuahua, Sinaloa, Durango, Tamaulipas and Tabasco in yellow (medium risk); and only Chiapas remains green (low risk). 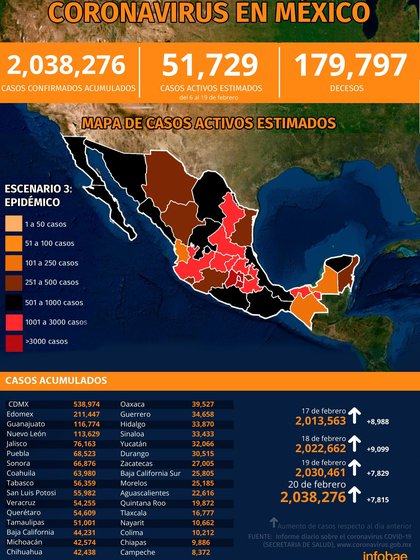 Regarding hospital saturation, Zaragoza Jiménez, reported that 35% of the general beds nationwide are occupied , so of the 32,185 beds without assisted ventilation support, 11,240 are being used and 20,945 are available.

The City of Mexico reported an occupancy of 65%, followed by the State of Mexico with 49% and 45% Nuevo Leon, entities that are part of the 31 with less than 50% saturation. 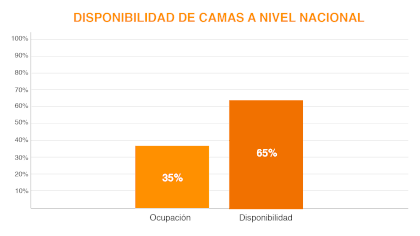 Regarding deaths, until yesterday, there were 20,307 suspected deaths of COVID-19 that include those pending by laboratory (n = 4,137) and those that are in the process of association-clinical-epidemiological judgment (n = 16,170) in SISVER.

In this context, Mexico City, the State of Mexico, Jalisco, Guanajuato, Puebla, Nuevo León, Veracruz, Baja California, Sonora and Coahuila are ranked as the 10 entities that have registered the highest number of deaths and that together they represent more than half (64.5%) of all those in the country.

With the above figures, Mexico ranks thirteenth in the world in number of infections and third with the most deaths from the pandemic, behind the United States and Brazil, according to the US Johns Hopkins University.

It is worth mentioning that so far 1,656,304 doses of the COVID-19 vaccine have been applied throughout Mexico. 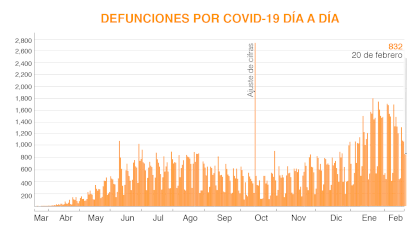