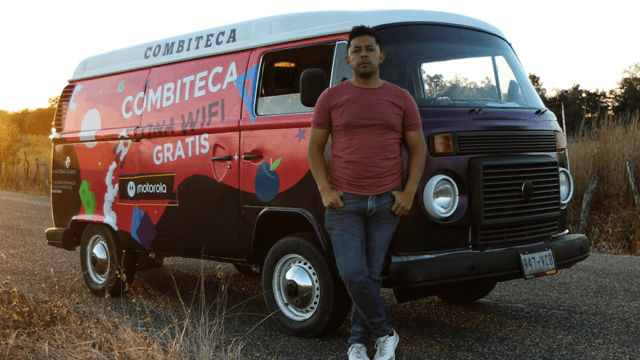 Fray Alfaro combined his combi with technology to turn it into a mobile library for students or as he calls it a combiteca.

One day Fray Antonio Alfaro, a physical education teacher, from the city of Comitán de Domínguez, Chiapas, began to see how the number of young people who visited their parents’ grocery store was more common and recurrent. The strangest thing for him was that they all went to the same thing: recharge 20 or 50 pesos to the balance of his mobile phone.

“About 8 months after the pandemic, it caught my attention to see how every day an abnormal number of children or young people went to micro-recharge their balances at the store. One day I approached them and I began to ask them and in all cases, their answer was the same: I was recharging to be able to study because not only they but their brothers and even their parents needed to connect more to the internet, “explained Alfaro in an interview with Forbes Mexico.

It was when the physical education teacher had the idea of ​​putting up a tent outside the grocery store along with a couple of benches and tables so that the students could connect to the internet at no cost so that they could download the assignments, connect to classes or download information to be able to do their homework.

“We had young people from eight in the morning to seven at night. But I realized that the tent was not enough that’s when I thought: how can I make this project reach more people ”, he shared.

It was when with the help of a friend “who knows more about technology”, Alfaro painted his combi, mounted a modem on it and adapted it to turn it into a walking library with internet for students in the region, something that he baptized as the combiteca.

Only instead of hundreds of books and documents, the ‘combiteca’ brings access to knowledge and information from the internet and access to remote classroom platforms from schools.

“I began to visit different parts of Comitán or the region, outside schools or marginalized areas, and then I found that 8 out of 10 students had never had contact with a smartphone or tablet, but now they had the challenge of studying in a remote. We were not prepared to face this and that is why I took on the task of starting to help them so that they would feel that there is a light at the end of the tunnel ”, Alfaro commented.

Soon after, his combiteca began to be recognized by people and schools.

“Then there were schools that called me and told me Fray, you can’t come on Thursday at 11 to help the kids connect. We have had up to 80 children connected to the combi ”, he explained.

Although all the internet provided by the combiteca is completely free for students, Fray commented that the fame he has gained in the community has allowed him at times to keep the project afloat due to the support of the community itself.

“Sometimes people already recognize the combi and if I go to a gas station they give me half a tank, they have donated computers that I have placed in some rural areas or materials or notebooks, but almost all the expense is financed by me,” he explains.

Alfaro’s plan is to travel 80% of the state of Chiapas, one of the furthest behind in education in Mexico, and to try to provide connectivity through the internet to the most marginalized areas.

Something that he himself recognizes is not easy at all, given the lack of connectivity infrastructure in some areas of Mexico. ” As long as I have 4G I can connect the kids, when I don’t even have 3G it’s much more complicated that’s when there isn’t much I can do.

The challenge facing Alfaro is not minor. According to the ICT Development Index (IDT) created by the International Telecommunications Union (ITU), with the aim of measuring the digital divide of a country, Chiapas is the state with the worst level of technology penetration with a rating of 3.18.

The IDT result qualifies from 0 to 10, where zero is zero development and ten is the highest level of ICT development. The national average for a country like Mexico is 5.07.

The study indicates that while the average of areas such as Mexico City has improved in recent years, in states such as Chiapas the rating index has moved little compared to the national average, which could indicate that the digital divide contrary to closing has stagnated or even increased in some areas.

Experts such as Jorge Alberto Hidalgo Toledo, professor at the Anahuac University and president of the Mexican Association of Communication Researchers, have even pointed out that the Covid-19 pandemic could even increase the digital divide and impact education in states with low penetration and telecommunications infrastructure, just like Chiapas.

This, because millions of children and young people in Mexico have found themselves in the need (obligation) to study remotely, many of them in understanding where neither the school nor the teachers have the necessary infrastructure to take classes through systems digital or the internet.

In Comitán and nearby rural areas, initiatives such as the Alfaro combiteca are the only hope to connect children with their classes or homework.

Although the combiteca project is still maintained with Alfaro’s investment and “some” community support, recently his case was selected by Motorola as one of the global images of your Risers campaign.

“When we started discussing what the focus of this campaign had to be. We realized that there is something that has not changed in the 92 years of history that Motorola has and that is passion, passion for innovation to connect people (…) that is how we went out to choose these people who do not matter if they are 10 or 70 years that through technology are trying to change not only their lives but also the lives of other people, ”explained Renata Altenfelder, executive director of Global Brand Management Lenovo Mobile Business Group (MBG).

The executive said that the objective of the campaign is to make the stories and ideas of people like Ray Alfaro known to the greatest number of people, and at the same time inspire others to use technology to improve “their community, neighborhood or country. ” .

Fray acknowledges that he did not expect the recognition of Motorola and his project the combiteca.

” I thought it was a fraud because they wrote to me on my Instagram and I responded like two days later, ” he said, adding that he sent his information hoping it was not a hoax and it was not.

The visibility of the project could be part of Alfaro’s plan to turn the combiteca into “something more like a digital classroom”, with books, tablets, and computers, and that we can impact young people from preschool to middle or high school.

“This campaign is more than a product launch, it is how we see the consumer as the center and how our technology links with their daily lives to learn, educate or entertain, ” said Altenfelder.

In the end, said Alfaro, the combiteca is nothing but an example that in these critical moments what we need is to support other Mexicans.

“I am very happy to see that people will be able to get to know the project that they know that there are good people in Mexico, that they want to do things for something good, that the young people of Mexico know that there is a light at the end of the tunnel and that in the On the way there is a guy who drives his van to help them ”, he pointed out.