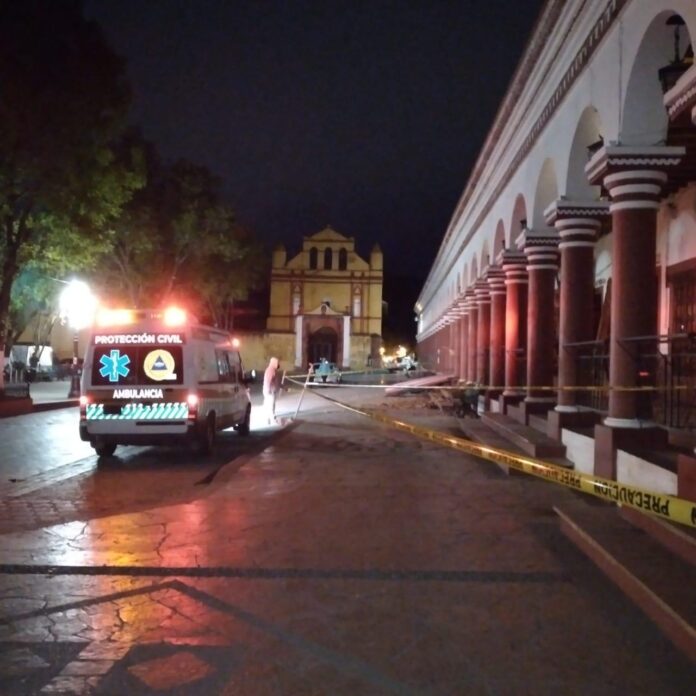 Luckily there were not any injured

The Municipal Police carried out the preventive cordon off in the Portales area, in the historic center of San Cristóbal de Las Casas, due to the collapse of a part of the roof, in order to avoid risks to passersby. Fortunately, no injuries are reported.

Since the sixteenth century when its initial layout was made, in this place there has been a shopping area, without reviewing its fragility

This Saturday, around 5 in the morning, a part of the ceiling of the corridor of the eastern portal of one of the oldest buildings in San Cristóbal de Las Casas collapsed, so civil protection and the police Municipal authorities cordoned off the area, and fortunately, no injured people have been reported.

Pablo Reyes Aguilar, Director of Civil Protection of San Cristóbal, explained that it is not known if by authorization of the owner of the property or of the company that rents the space “the Electra store” have the corresponding permits before the National Institute of Anthropology and History ( INAH), since they observed that there were beam restoration works, and assured that they must present the corresponding permits that apparently they do not have.

He assured that as Civil Protection, they are going to protect the property and after removing the material that fell, they will carry out a study of the conditions in which the other part of the roof that did not fall is located and know if there are guarantees of closing only a part or in If applicable, completely close the corridors known as Los Portales.

It is known that the property is owned by Socorro Zebadúa, and has a neoclassical architecture from the XIX century, which for many years was used for women artisans of sweet, to make their fairs in the so-called Corpus Christi, becoming in the upper part a terrace for Commercial use.

The architect Issac Cordero, from the Chiapas College of Architects, as Benito Artigas from UNAM pointed out many years ago, noted the fragility of old adobe buildings. Since the sixteenth century when its initial layout was made, in this place there has been a shopping area. It consists of twenty-nine semicircular arches on Tuscan columns that support the artisan beam ceiling and the balustrade topped by ciboriums.

Currently, it is a pleasant meeting place where there are several stores that offer shoes, clothes, and attractive souvenirs, as well as cafes where you can sit and enjoy the quiet atmosphere of San Cristóbal, but fortunately, at the time of the fact, there were no people injured.