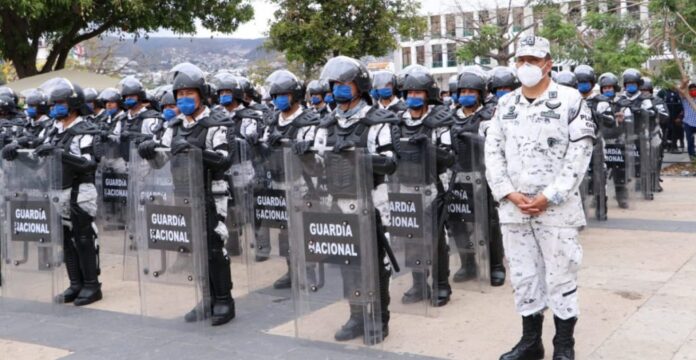 Mexico began this Friday the deployment of hundreds of immigration agents and members of the army and the National Guard on the southern border of the country with the aim of launching a new offensive against migrant smuggling that will focus on detecting groups of families with minors who have crossed irregularly.

The military and members of the National Migration Institute (INM) staged an unusual parade in Tuxtla Gutiérrez, the capital of Chiapas, just one day after the Mexican government announced that it will limit non-essential crossings from Guatemala on the grounds of avoiding the spread of the coronavirus.

The INM explained in a statement that as of this Friday, the deployment of troops along the border river Suchiate will begin, more documentation controls and sanitary filters will be installed and the areas of illegal crossing of people with drones and vision mechanisms will be monitored. nocturnal.

“Mexico will deploy, as of this March 19, operations on the southern border of the country to safeguard the rights and integrity of minors migrants from different Central American nations, used by criminal networks as a transit pass to reach the north of the country”, the note indicated.

According to the INM, traffickers or “guides” suggest Central Americans travel with minors to facilitate entry into Mexico and the United States, which since Joe Biden arrived at the White House has eliminated some of the anti-immigration measures imposed by his predecessor.

The current migratory flow has not yet reached the 2019 figures but the US administration is concerned about the rapid increase since last October in illegal crossings from Mexico, especially of unaccompanied minors and families.

The Government of Mexico decoupled the measures against COVID-19 on its southern border from migratory actions, but both coincided in time. In addition, he did not explain why they are launched now when more than a year has passed since the start of the pandemic.

Restrictions on non-essential travel on the grounds of controlling the coronavirus were implemented in March 2020 on the northern border at the proposal of then-President Donald Trump. However, analysts agreed that its real objective was to stop migration because it allowed immediate expulsions of those who crossed illegally into the United States.

The most recent precedent for the deployment of Mexican forces like the one announced this Friday was almost two years ago after Trump threatened Mexico with imposing tariffs if it did not control the flow of migrants, which the Mexican government did by multiplying checkpoints and controls. on the entire route but especially in the south.