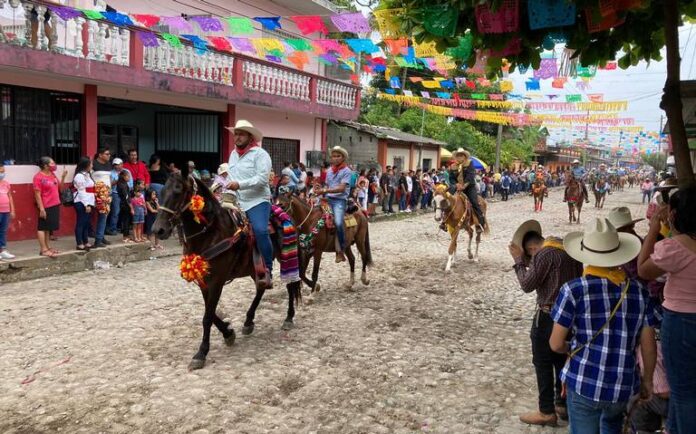 Residents of Tuxtla Chico broke the healthy distance and sanitary measures this Thursday, April 29th, to celebrate San Pedro Mártir on the last day of worship to this saint.

Believers flocked to the streets of this town to witness the horse races carried out by horsemen from this town.

Throughout the day and almost until nightfall, the spectators gathered on the sidewalks of at least four streets in this municipality.

In the ritual of the correlones it was possible to appreciate how they performed the duck sacrifice ceremony, which year after year has brought together hundreds of visitors from municipalities in the Soconusco region.

On the part of municipal authorities, there was no support whatsoever to prevent people from gathering together, nor did civil protection elements attend, because the city council of Tuxtla Chico denied permission to carry out this festivity, however, the organizers ignored this restriction and carried it out.

The devotees of San Pedro Mártir besieged practically two blocks to be able to carry out the horse races and the so-called “Candy War”, in which they throw sweets among the participants and the residents dedicate themselves to collecting them.

Despite the exhortation of the health authorities in Chiapas, the tuxtlachiquenses attended the exhibition of this tradition without wearing a mask. In the clusters of people, there were old people and children who did not use any protection either, even the harvest of food and beverages was carried out that were not sold with sanitary protocols.

Calle Ocampo Oriente has been for more than a decade the place chosen by the correlones to carry out this ours in honor of San Pedro Mártir. Last year the festival was not held due to the pandemic, but in 2021 visitors broke with sanitary measures, and rivers of people could observe on this cobbled road that usually looks calm.

For a whole week, they made pilgrimages where there was also a notorious crowd of people, as well as in the Cofrado that is the site where they carry out worship ceremonies to this saint.