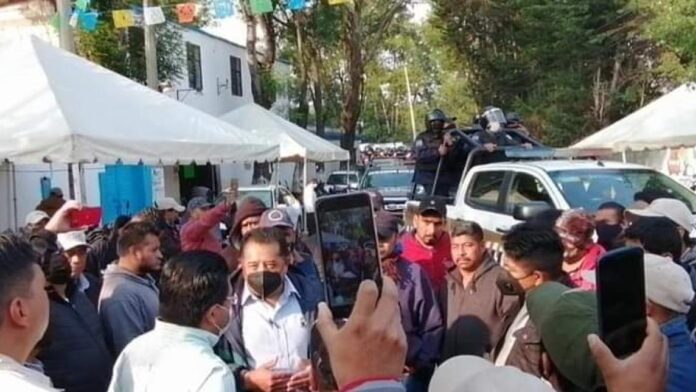 San Cristóbal de Las Casas, Chiapas.- The Citizen Security Council, made up of representatives of neighborhoods, neighborhoods, and subdivisions of this city spoke in Parque Central due to the lack of drinking water service, due to the work stoppage held by personnel attached to the Union of Workers at the Service of the Potable Water and Municipal Sewerage System (Sitrassapam).

Guillermo Tomás Espinosa Cabrera, a spokesman for the dissatisfied group, said that they demand the opening of dialogue between Sitrassapam and the municipal authorities since citizens cannot be held hostage to a disagreement or to the union demands of Sapam workers, “they must sit down to dialogue, we are not for or against anyone, but we are concerned about the health of citizens in the absence of water. “

For their part, the municipal authorities, through the Police Directorate, issued a press release exhorting the Sitrasapam leadership to rethink their disagreements and not continue to interrupt the water supply since, they are guaranteed the right to protest, the only limit that exists are the rights of others.

Likewise, the Municipal Police clarified the versions disseminated through social networks and other informational spaces, about the intention to evict the dissatisfied group, since only SAPAM managers and staff were provided with support to enforce the human right to water, which has been illegally deprived by the union leadership, who conditions a dialogue table to unblock the facilities, which have been closed for more than 48 hours.

The corporation reported that, in strict adherence to human rights, it maintained a preventive presence and documented the events in accordance with the action protocol, without the personnel descending from the units, while the SAPAM board of directors dialogued with the union leadership so that allows access to the facilities and the pumps will be turned on, which was not allowed and instead conditions a dialogue table and the removal of the elements.

Faced with this situation, the SAPAM board of directors asked the elements to leave the place so that they would continue to dialogue, which happened a few minutes later, but not before exhorting the union leadership to reconsider their disagreements peacefully and not to continue interrupting the supply of water since, although free demonstration is guaranteed, the only limit is the rights of citizens, which have nothing to do with their demonstrations.

They prevent the restoration of drinking water service in San Cristóbal

Members of the SITRASSAPAM keep the supply interrupted

On Wednesday morning, at the request of the operating body of the Municipal Drinking Water and Sewerage System (SAPAM), elements of the Municipal Police Directorate accompanied with preventive presence the restoration of the pumping service and distribution of the vital liquid in the facilities located in La Almolonga. The workers unionized to the Union of Workers at the Service of the Potable Water and Municipal Sewerage System (SITRASSAPAM), will keep the supply to the citizenship interrupted, derived from a labor problem.

The police clarified that there was no intention to evict the dissatisfied group as it was handled on social networks, they only came to accompany SAPAM managers and staff to enforce the human right to water, which has been illegally deprived by the union leadership, who conditions a dialogue table to unblock the facilities, which have been closed for more than 48 hours.