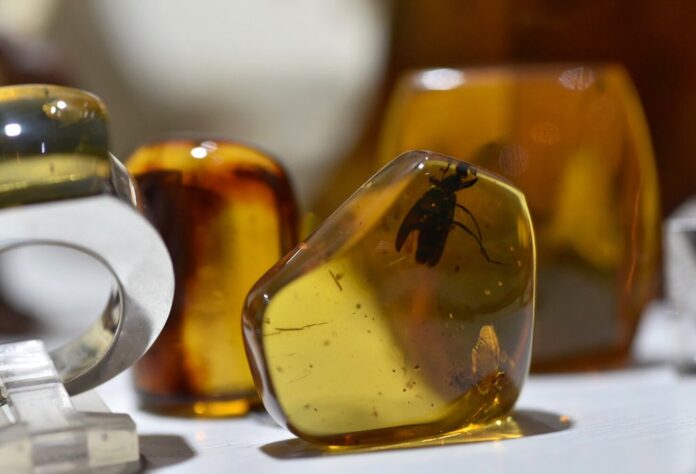 * It is clear that Chiapas has been a mega diverse place since ancient times, a heritage that we have until today, and that is why it is important to take care of our natural resources.

* Efficient regulatory mechanisms need to be established to control the sale of amber with biological inclusions.

Gerardo Carbot Chanona, doctor in Biological Sciences and researcher of paleontological issues at the Ministry of the Environment and Natural History (Semahn) said that, as amber is a fossil, it should be protected by law, however, it is extracted and commercialized in indigenous areas of the Highlands of Chiapas for OVER 100 years, and families live from the extraction industry.

Carbot Chanona pointed out that, even though it is a natural heritage, agencies of the different levels of governments promote its sale through the “amber expo”, events that even become national.

The researcher acknowledged that this activity can be complex, since behind there is a socioeconomic issue, therefore, the sale cannot be prohibited from one moment to the next, because there are families that make a living from it. 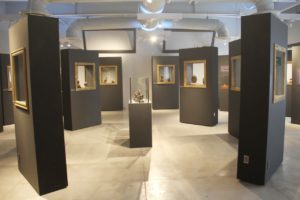 Artistic collective made up of sculptors and jewelers, all winners of the Annual Amber Competition, exhibiting their works at the Musart.

On the other hand, he said that amber is known to be used for jewelry and crafts that are sold locally and worldwide, this is sometimes called stone, but it is a fossil resin, that is, in its structure there is no type of mineral, making it unique.

He commented that amber from Chiapas was ordered to be analyzed a long time ago to know its physicochemical properties, as it is a resin of organic origin, its composition is carbon, oxygen, hydrogen and sulfur.

In the mineralogical question it has a conchoidal fracture, in addition it does not have a defined shape like minerals that crystallize in a geometric way, its total decomposition point is around 476 ° C, but it softens between 150 and 162 ° C.

Something important is that it does not contain water or moisture in its structure, it does not generate crystals, a volatile or solvent, it is not a hard material and it is a poor conductor of heat and electricity, added the specialist.

The researcher mentioned that said amber was produced by two types of trees of the genus  Hymenaea  that are legumes, the current species is the  hymenaea courbaril , a large tree, with thick branches and that produces its fruits in pods, can be found in the Depression and Altos de Chiapas, its extinct relatives are the species Hymenaea mexicana  and  Hymenaea allendis , being very resinous, it sprouts from the trunks or branches. 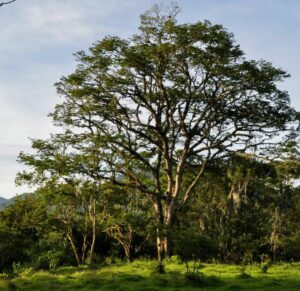 He explained that the resin helps the trees to seal damage to their external structure, whether it is a broken branch or if the bark falls off, its smell attracts insects that are trapped in it or when it runs off it traps things in its path.

As it hardens in the trunk or soil, it is buried over hundreds, thousands and even millions of years by sediments, which can be transported to river basins, coastal lagoons and even the sea.

He mentioned that the accumulation of sediments produces high pressures and temperatures, this caused the resin to have a physical-chemical change in its molecular structure.

The researcher added that, during amberization -amber formation process- the pressures completely excluded the water from the resin, also, together with the high temperatures, the organic structure formed by molecules with carbon, gave way to polymers (chains).

For this reason, when an organism was trapped, the pressures made the insect’s water also evaporate, stopping oxidation and decomposition, mummifying them and stopping time.

He emphasized that in Chiapas, there are several deposits with amber, the most famous is Simojovel, 90% of what is commercialized is extracted from there, the first town to do so was Totolapa, they have records until the end of 1800, and among the Newest is Palenque and Raudales Malpaso.

He said that the extraction is carried out in the open, where they dig up the hill until they reach the layers that have the amber, and underground through mines.

Carbot Chanona emphasized that the age of amber is established between 22.8 to 23 million years, although there was some discussion, there are those who said that it belonged to the Oligocene and others from the early Miocene, but the reality is that it is from the lower Miocene.

He added that this is known because isotopic studies were made, with extracts of the original shell of crabs that gave an age of 23 million years, this came to clarify the doubt, because the gastropods were able to adapt to the resin.

He pointed out that amber allows a type of extraordinary fossilization, which allows them to see organisms in the third dimension, as they are well preserved, with delicate structures, something that is difficult in rock fossilization.

The researcher added that in the amber they have found ants, stingless bees, beetles of many types, this has to do with the habitat, being related to trees and it is easy for them to get trapped.

At the same time, he mentioned that in the Campo la Granja mine in Simojovel, about 1000 specimens have been found, representing nine species new to science.

Amber not only gives us this taxonomic information, also through amber we can see this ecological management, the interaction with communities, that is, pieces with many specimens of ants or bees, or between a predator and its prey, and maternal care, exposed the specialist.

Finally, he said that this set of fossils, both those in amber and in sediments, allow us to make a reconstruction of what Chiapas was like 23 million years ago.