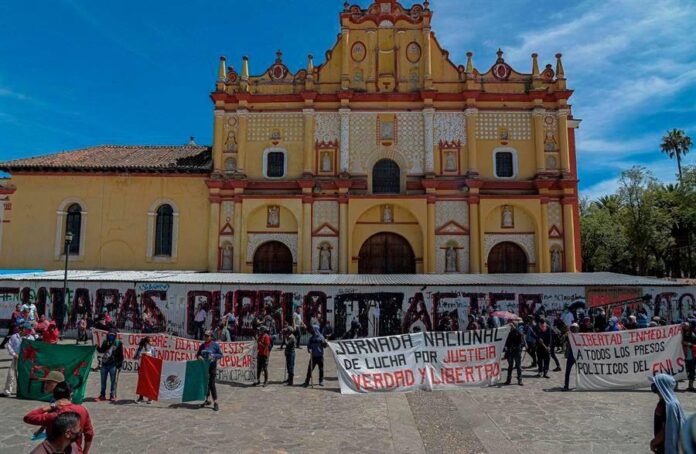 Dozens of indigenous people marched this Tuesday, Columbus Day, in the municipality of San Cristóbal de las Casas, in Chiapas, to commemorate the 529 years of the “resistance” of the original peoples of America.

This October 12, when the arrival of the Spaniards to America is commemorated, the protesters also focused their protests against the Mexican State to demand, with banners and sticks in hand, freedom and justice for the indigenous “ political prisoners ”.

During their journey they painted public buildings and chanted slogans against the Mexican State.

The protesters pointed out that despite the fact that there are laws and guarantees on indigenous human rights, much remains to be done, since there is still the oblivion of indigenous peoples.

“We have walked peacefully for many years. Our form of organization is based on consultation with the peoples and on the collective work of the assemblies, ”Javier Pérez Pérez, a member of the National Front of Struggle for Socialism (FNLS) , told the media .

The protesters spoke during the rally that this day will remind everyone that for many years found ways to resist domination and dispossession.

They recalled that since 1974 more than 250,000 indigenous people from 327 communities in Chiapas have participated in the so-called Indigenous Congress , where it was agreed to promote the struggle on four issues: land, education, health, and production and marketing.

This year, Mexico commemorates the 700 years since the founding of the city of Tenochtitlan (1321), the 500 years of the conquest of Hernán Cortés (1521), an event now renowned as “indigenous resistance”, and the 200 years of the consummation of independence (1821).

In addition, the Senate declared October 12 as the Day of the Pluricultural Nation last year to recognize indigenous people and re-signify this date.

All this, added to the fact that President Andrés Manuel López Obrador asked the King of Spain and Pope Francis to apologize for the conquest, has increased the debate in Mexico in recent years.

But although the Mexican government extols the ” indigenous resistance ” against the Spanish conquest 500 years ago, the native peoples continue to denounce the abandonment and marginalization of the Mexican state.