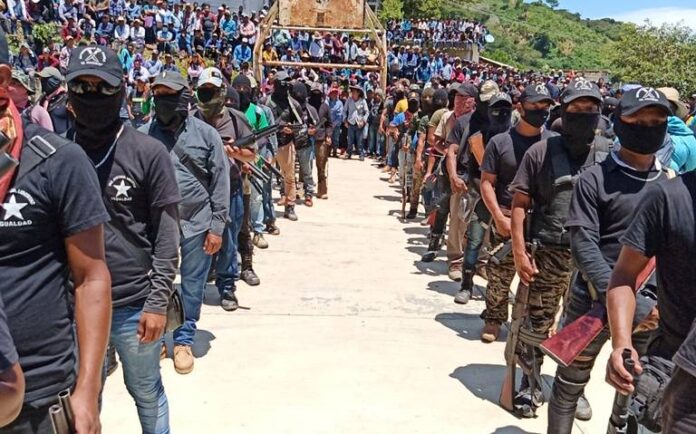 The self-defense group “Los Machetes” has only been a mediator between them as a people and the instances of the state and federal government.

San Cristóbal de Las Casas.- In a statement, the self-defense group ” Los Machetes ” of the municipality of Pantelhó, demarcated priest Marcelo Pérez Pérez, from being the promoter and creation of this group, and they assure that he has only been a mediator between them as a people and the instances of state and federal government.

“Father Marcelo as founder and that he gives us orders, those are lies, we started organizing little by little without knowing Father Marcelo, pain and death forced us to organize ourselves to defend our people, if we have more out of 200 murdered, we cannot remain with our arms crossed ”they quote in the letter.

The letter where it is identical to be written by Commander Machete, affirms that Marcelo is a true mediator, who reassured the people on July 27, “and that he was mediating so that the two dialogues were held in our town of Pantelhó and that is how he left. finding peace, we recognize his work of dialogue with the federal and state governments for the peace of the peoples ”.

It affirms that the “Los Machetes” Group is made up of indigenous soldiers who have had the courage and the decision to save and protect the people, “to give their lives in the different encounters of armed struggle against the hitmen who had taken over Pantelhó for a long time, that they had kidnapped with a cunning strategy in which they could control and have the power to be like a boss and have the power to have the money using the city hall ”.

They explain that in Pantelhó there are 20 commissioners who are fighting to direct for the good of the municipality, commissioners who do not depend on the group “Los Machetes”, It is the protection of the people against the hitmen, we respect the laws of the government and that we are respected ”.

He affirms that Pantelhó is calm due to the good coordination of the councilors together with the 20 commissioners, in addition to making it clear that they do not want and will not allow the entry of Raquel Trujillo “because she is the main culprit along with Cesar Espinoza.”

Finally, they express their trust with the federal and state governments, as well as that they give legality from the Chiapas Congress to the municipal council that has been elected from the people and with the people.