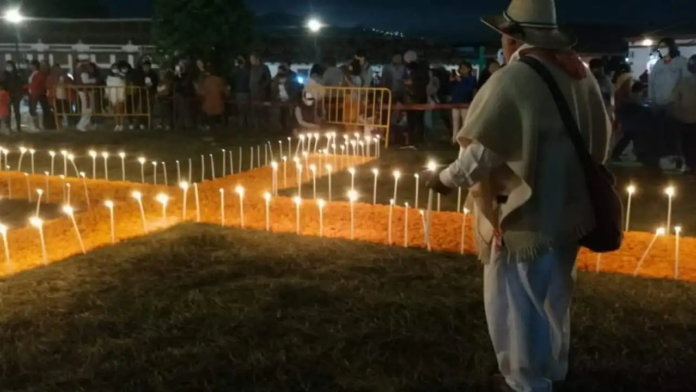 In San Cristóbal de las Casas, Chiapas, the first indigenous festival of the K’in Sañtyo Day of the Dead was held, in which indigenous Tzeltal, Tzotzil, Chole, and Zoque ethnic groups participated.

The festival took place in the Plaza de La Paz where 13 altars with more than a thousand seasonal flowers and hundreds of candles were installed, but the main attraction was a 10-meter cross decorated with reeds and marigold flowers that represents the path of souls.

“We started our altar with respect for the cross, the cross and the photo of our ancestors, in our mother tongue we say tata mol tutic, memve tutic, abuelito and abuelita who are no longer with us”, Margarita Acuña Bautista Hernández, indigenous Tzotzil de Huixtán.

Each altar was decorated according to the culture of each indigenous ethnic group.

The Tzeltales, Tzotziles and Choles, placed different dishes such as smoked beef broth – a special gastronomy for the holiday – accompanied by boiled Chayote, cane, mandarin, and the traditional drink made from corn, Posh.

The zoques created the three levels of the altar where the colors black, white and purple prevail, representing mourning, purity, and peace.

In this traditional sample, musicians and traditional prayers could not be absent, who invoke and guide the souls of the dead to return to earth.

“It is the union of these 13 regions of Chiapas, especially the region of Los Altos, celebrating the Day of the Dead, the day of the dead that is so traditional in our region, mainly in indigenous regions that as we see it here is already celebrating” , Mariano Díaz Ochoa, municipal president of San Cristóbal.

The “ K’in Sañtyo ” festival will last for three days, where visitors who come to San Cristóbal de Las Casas will be able to learn about and appreciate the different cultural expressions that exist in indigenous peoples descended from the Mayans .