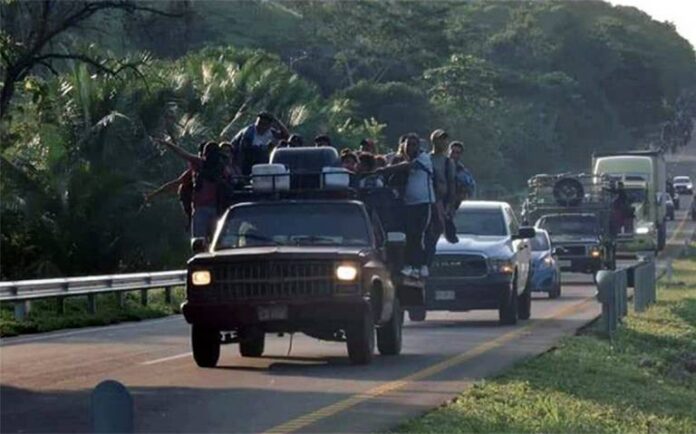 Mexico’s National Guard said on Monday, November 1st, that its officers opened fire when a pickup truck carrying migrants tried to avoid an immigration checkpoint and ram a patrol vehicle, and the gunfire killed one migrant and wounded four others.

Prosecutors in the southern state of Chiapas said in a statement that the dead man was a Cuban citizen, but did not supply his full name.

Apparently, the migrants in the truck were not part of some 4,000 mainly Central Americans who are seeking to reach Mexico City on foot. The shooting late Sunday occurred about 25 miles (40 kilometers) from where the migrant march was.

A statement from the National Guard said the truck ignored orders to stop for an inspection near the town of Pijijiapan and tried to ram a patrol vehicle. It said officers opened fire because the driver of the truck “put at imminent risk their safety” by trying to ram their patrol vehicle.

The pickup was carrying a total of 13 migrants, most from Cuba but there were also three from Ghana, the Guard said. They and the driver were detained. The wounded migrants were taken to a nearby hospital for treatment. According to prosecutors in the southern state of Chiapas, a rifle was found in the truck.

Meanwhile, migrant rights advocates and aid workers traveling with the caravan estimated there could be 1,000 children in the group whose participants have spent days trudging along highways under a punishing sun.

The Mexican government has been attempting to discourage the march, saying the poor conditions are putting the migrants’ lives at risk.

On Monday, the National Immigration Institute said six cases of the tropical fever dengue had been detected among members of the migrant march. The institute said five of the cases were minors, one of whom was taken to a hospital for treatment of a severe case of hemorrhagic dengue. It said the adult companions of three of the other dengue cases had refused treatment.

Much larger caravans crossed Mexico in 2018 and 2019, but those migrants never tried to walk the whole distance. They usually caught rides aboard passing trucks.

But Mexico has told truckers not to pick up migrants, saying they could face charges of migrant trafficking. The migrants are also afraid of becoming separated from the group, for fear they will be rounded up and deported.

Cuban migrants seeking to cross the border to the U.S. often contract the services of migrant smugglers.

Deadly confrontations between law enforcement and migrants remain relatively rare in Mexico, but a National Guard officer was killed by suspected immigrant traffickers in September.