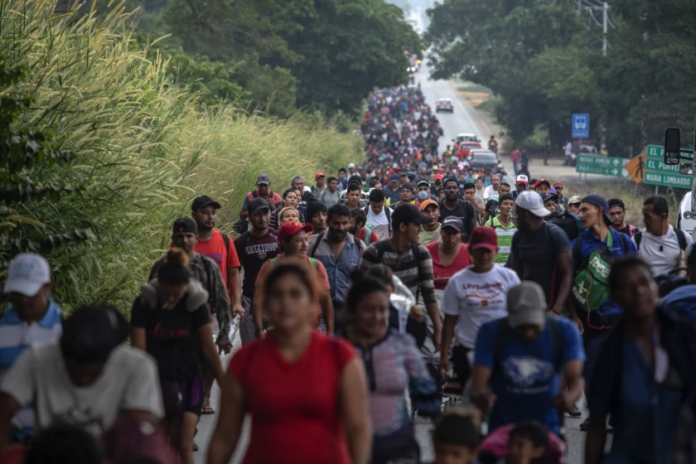 At a time when Mexican President Andrés Manuel López Obrador began a dialogue on immigration and other issues with his North American counterparts in Washington, a new migrant caravan left the southern Mexican city of Tapachula on Thursday morning.

The new group of migrants heading north represents one more reminder of the urgent need to address the issue of migration in the region than López Obrador hopes to speak in his meeting with President Joe Biden.

The most recent caravan is made up of about 2,000 migrants, mostly Central Americans and Haitians.

Honduran Álex Leyva said it is the second time he has tried to travel north in a caravan. The first time he left as part of another group was on October 23 but was forced to give up when he fell ill. Agents from the National Migration Institute (INM) returned him to Tapachula, where he had previously started the asylum application process in Mexico.ADVERTISING

“My country is in the worst economic situation, crime, famine, there are no studies, there is no education for the cipotes (children),” he said. “So we decided with my wife if we can achieve our goal (of a better life).”

The previous caravan Leyva had traveled with was in the state of Veracruz, but it has shrunk to a few hundred migrants after having grown to around 4,000.

Luis García Villagrán, a coordinator of the Center for Human Dignification, said that migrants are requesting documents that allow them to stay anywhere in Mexico. The Mexican government has relied on the strategy of containing migrants in the southernmost region of the country in order to reduce pressure on the border with the United States.

However, the states in that region are among the poorest in Mexico, and the opportunities to find employment are greater in the northern states.

García Villagrán said that even migrants who received humanitarian lives that allow them to travel freely in Mexico have been detained by INM agents and returned to Tapachula.

Migrants confined in Tapachula, near the border with Guatemala, feel increasingly desolate at the slow pace of asylum procedures. They complain that they have not been able to find a job that allows them to support their families.

The caravan began several years ago as a way for migrants who did not have the money to pay human smugglers to feel safer during their journey to the US border. However, the Guatemalan and Mexican authorities have recently taken more aggressive measures to quickly disband the caravans with the use of security forces.

The caravan that shrinks in Veracruz was the first to reach this far into Mexican territory in the last two years, but the harsh conditions of the road and the offers of the Mexican government to regularize their immigration status have led most to withdraw.

López Obrador considers migration in the region to be one of his priorities for Thursday’s summit with Biden and Canadian Prime Minister Justin Trudeau. The Mexican president has pressured the Biden government to invest in expanding a reforestation program under which farmers are paid to plant certain types of trees on their land. That income allows the inhabitants of rural areas to remain in their territories instead of feeling the economic pressure that forces them to emigrate, said López Obrador.