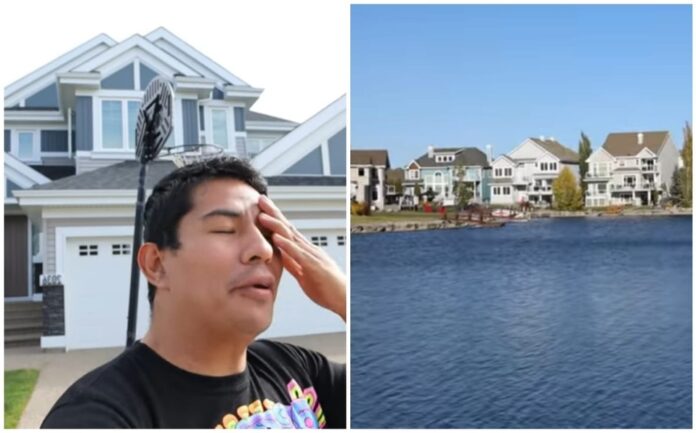 Diego Saúl Reyna, originally from the Terán neighborhood in Tuxtla Gutiérrez and who left as a very young immigrant to Alberta, Canada, has become a trend on social networks

The video in which his new home is appreciated already has more than one million 300 thousand views on YouTube and here we show you why.

Diego Saúl is the same one who in 2016 put the Mexican flag on the roof of the Trump Tower in Vancouver, shocking social networks when he spread his message saying that thanks to the work of Latinos, the tower had been built very well and that this culture honestly continues to drive the economy of the United States and Canada every day.

Youtuber  Diego Saúl Reyna is extremely popular on the social network where he has almost 2 million subscribers because on his channel he usually shares videos of what the experience of a Mexican living in Canada is like.

Recently a video in which he boasts his new and luxurious house on the shore of a lake in the northern country went viral, as the man began working as a bricklayer.

In the video, Reyna shows us all the corners of her huge new house, which has a study, office, guest bathrooms, bathrooms with dressing rooms in the main rooms, terraces, recreational spaces, and even a complete house under her house, which he said can be used for rent.

In addition, the area where you live has a private lake for residents, which offers an unparalleled view just a few steps from your home.

Diego’s success story has become extremely popular on YouTube, as the self-made man and living in Canada after moving and starting work as a bricklayer.

Currently, in addition to his successful YouTube channel, Reyna has his own construction company and helps Latinos who want to move to work in Canada, which has earned her being highly loved among his thousands of followers.

In other videos, the YouTuber has shared how he met his wife and mother of his two children, the jobs he has lived in the northern country, how he learned English, among other fun experiences.

Diego specified that this new house had a total price of $ 740,000 Canadian dollars (approximately 12 million pesos), and he bought it with a 40% down payment.

Who is Diego Saul Reyna?

Diego Saul Reyna, is originally from the state of Chiapas, who decided to emigrate to Canada at the age of 16, in search of a better quality of life.

Diego lived for a time with a Canadian adoptive family, which allowed him to learn the language and adapt to the culture. At the end of high school, he went to work as a bricklayer, a job that he has described in his videos as “perfect for him.”

Later he met Katrina, a young Canadian, whom he married and they currently have two children.

From his official page, Diego tells that one of the main reasons why he ventured into social networks was after announcing his contest to become the president of a country.

Since he realized that many Mexicans start from scratch when they live in another country and are often tried, this action led him to approach more immigrants, making it viral.

«The following days I received countless requests for interviews, on different platforms: news, radio, internet in English and Spanish; which led me to have many followers on the only social network I had at the time, Facebook. “

Since then, the Mexican decided to open a YouTube channel in order to train and advise many immigrants who are starting from scratch in an unknown country.

Reach out to Diego on his website at www.diegosaulreyna.com