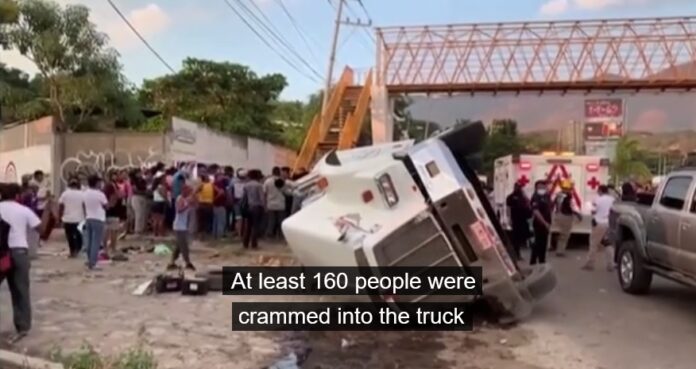 Migrants traveling in a caravan in southern Mexico have blamed the Mexican president for the death of 55 people killed in a truck accident on Thursday (December 9).

At least 160 people were crammed into the truck when it overturned in the southern state of Chiapas.

Every month, thousands of migrants fleeing poverty and violence in Central America travel through Mexico to reach the U.S. border.

But many complain of mistreatment in Mexico.

Leslie Mejia from Guatemala says she blames the Mexican Migration Institute and the President for what has happened.

“I don’t know why the President doesn’t react while seeing what happens. Maybe it is because he never fought for a dream. He never fought the way we are fighting now. The only thing we want is that he helps us and not put more obstacles in our way. We are already tired after one and a half months of walking, and he still doesn’t let us continue our way.”

Responding to the accident, officials from Guatemala and Mexico pledged on Friday (December 10) to tackle international people-smuggling networks, which they blamed for the accident.

The Mexican Foreign Minister Marcelo Ebrard said a regional “action group”, backed by Central American nations and the U.S., had been set up.

It will “investigate, identify, learn, and bring to justice” those responsible for the recent crash.

There have also been calls by officials for Guatemala, Mexico, and the United States to align and standardize their migration policies to prevent future tragedies and improve dangerous conditions.

Thursday’s incident is one of the worst fatal accidents involving migrants trying to reach the United States.