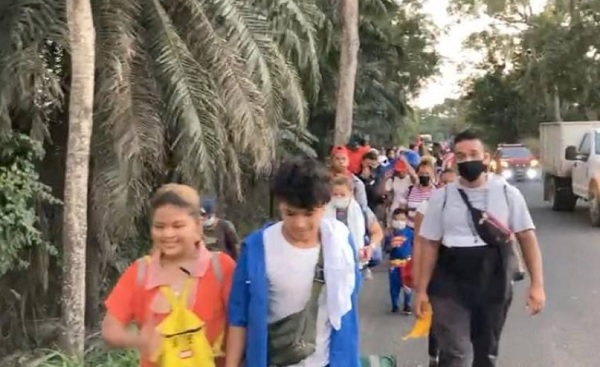 Migrants will receive a pass that will allow them to move individually and with their own resources across Mexican territory.

Agents of the National Institute of Migration (INM) informed the migrants will no longer be transported on motor vehicles paid by the National Migration Institute since there are not enough resources to do so.

“The government of Mexico supported them as far as it could, but there are no more resources for buses and now what is being done is to give them a pass so that they can move individually and with their own resources,” Hugo Salvador Cuellar informed them, Subdelegado Federal Zona Sur of the INM.

From this moment on, migrants seeking to leave this city have to stand in line, sign up for a list that will be coordinated by the INM, and then wait for them to give them an exit pass with a QR code so that they can board a bus at any of the companies that exist in the city, but now the bus ticket will be paid by the migrants with their own resources.

After the announcement, Cuéllar called on the hundreds of migrants who were waiting for a bus to travel to the interior of the country, to maintain calm, order and not to carry out more blockades as this affects the Mexican population, and most of all, try to avoid confrontations.

The exit pass bears the name of the foreigner with the QR code that they must check at the bus terminals so that they can sell a ticket destined only to the entity that will be determined in the same code.

After the announcement, some 300 desperate migrants decided to start walking to other municipalities and advance along the coastal highway in an improvised micro caravan, as far as they could, to leave Tapachula, a place where they have been stranded for months, some almost for one year, without being able to advance to other municipalities due to checkpoints, operations and regulations that prevented them from leaving Tapachula.

“We are already tired of going hungry and we decided to walk out of Tapachula and look for another place where we can work or get the papers to find a job,” said Luis Contreras, originally from Honduras.