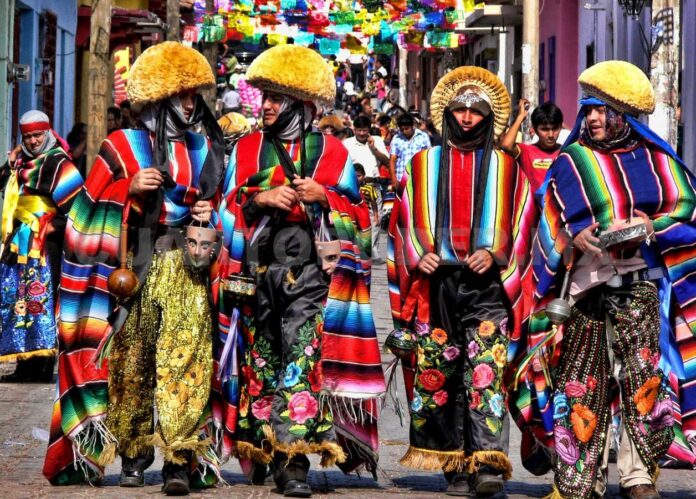 Chiapa de Corzo, Chiapas.- The calendar of activities for the month of January is communicated to the entire Chiapas community and the state.

On day 4, the parachicos output of the young children is totally suspended. On the 15th, the mass in honor of “Señor De Esquipulas” will be held in the church itself, the parachicos will be able to dance, but not inside, since the protocol will be outside the church for the time determined by the patron.

On the 18th, the deceased patrons will dance, they will meet in the patron to dance with an estimated time, without a tour. On the 20th, the mass will be held in Santo Domingo de Guzmán, the dance will be outside the church, with a time estimated by the patron, without transferring the image.

While on the 23rd, the dance will take place outside the church of Santo Domingo de Guzmán, without transferring the image to the new priostes.

They emphasize that all the dances will be in each of the respective Hermitages, where they can dress, however, there will be no exit from the patron’s house, nor will any Hermitage be visited, other than the one that is celebrated that day.

Finally, they notify that the naval combat, sports games, floats, and stalls are canceled, as well as the departure of chunta.

10 THINGS TO SEE AND DO DURING THE FIESTA GRANDE IN CHIAPA DE CORZO.

The Big Party in Chiapa de Corzo, a celebration that takes place every year from January 8 to 23. It is a very old festival that has been celebrated since the origins of the city. This is a deeply rooted tradition in the area, customs, dances, typical costumes, masks, and folklore throughout the neighborhoods during these days of festivities in the town. During the days of dances, you can see the Parachicos and Chiapanecas in the streets with beautifully embroidered costumes full of life, handmade masks, and colorful zarapes. I lived this party for the first time this year, here I list some tips to be able to fully enjoy this tradition and enjoy a lot of color and party.

Chiapa de Corzo is a small city; a city of neighborhoods. It is a place where the people are very hospitable, they welcome you with open arms and with deeply rooted customs and identity. This is a very local festival, few national and foreign tourists are seen, but even so, the locals when they notice that someone is not from there, they offer to explain to you about this festival, about its traditions and make you feel at home.

In this place you will find an extensive handicraft market, artisans arrive early from various parts of the state such as San Cristobal de las Casas which is 1 ½ hr from there, you will find from jorongos, embroidered blouses, hats, woolen toys, and typical costumes from chiapaneca and parachico, as well as hand-carved masks.

There is also the famous Kiosko called La Pila or La Corona, an octagonal kiosk with a Spanish Mudejar style. One of its uses was to monitor possible attacks by rebel Indians from the top, and it was also a point to supply water to the population.

2.- Live a parade of the parachicos.

The parachicos are the representative image of this party. If you talk about a big party, at the moment the image of a parachico dancing comes to mind. According to history, the parachicos come from when a rich landowner from Guatemala, María de Angulo came to Chiapa de Corzo to look for the healers to cure her son of a disease he had, the Chiapas danced “for the boy” to entertain him, From there it is said that the name of Parachico comes from, the son of María de Angulo managed to be cured and this lady in gratitude gave food and money to the people of the town who were starving due to a lobster plague that had ended everything.

The parachicos dance through all the streets visiting altars and houses where Saint Sebastian Martir, the main protagonist of this festival, are exposed; San Antonio Abad and Our Lord of Esquipulas. They start dancing from the Patron’s house in the morning, visit altars throughout the neighborhoods, and finish at night.

3.- Get to know the Patron House museum.

The patron house museum is the starting place for the parachicos in the morning towards the all-day procession visiting the altars and offerings. In this place the patron arrives early, a ritual is performed where he dresses, there is his mask, instruments, costumes and the montera (the ixtle hat) The mask is inherited from patron to patron, which is a lifetime position for several years until the employer dies or inherits the position the next. The patron’s ritual is to get dressed, and go out where the altar of San Sebastian and other saints is. He makes a prayer and asks for the parachicos who start and join the cause. In this house-museum you can see gentlemen with their children, young people dressing as parachiles and older people help them as they should wear their suits.

4.- Visit the altars with the procession.

When leaving the house of the Patron, he himself guides the Parachicos on their journey, he plays with a whistle (flute) the rhythm that the Parachicos dance, brings an entourage that plays drums and also takes care of him, and by his side is always the Luchita, a woman from Chiapas who always accompanies the Patron on his journey. The altars that they go through are in premises, garages, or in the rooms of the houses, they also pass through churches, dance in the atrium, and continue their journey. Halfway through the procession, they stop to eat at the Prioste’s house. The prioste is the person who has the patron saint San Sebastian for that year, he is in charge of receiving and feeding all the parachicos that are in the procession.

During the big festival, the houses have their altars exposed to whoever wants to visit them, be it any passerby or parachicos. If you walk through the streets, you will be able to see through the doors, that in the architecture of this place, most are metal doors with a window and a grate on the top which is kept open all day, so if you pass by you can look out and see the altars that families set up in the entrance or living room of their house. The people are very friendly, if you ask permission to pass, they welcome you with a soft drink or water if you like. It is a place of very warm people.

5.- Delight in the local gastronomy.

When visiting this place during these holidays you have to try the delicious local food that you can find everywhere. There is the handicraft market with food stalls where you can populate a delicious pozol, either simple or cocoa. There are also the tlayudas with jerky, which is another typical dish of the place, it is like a giant huarache with meat, lettuce, cheese, avocado on top.

Other of the typical dishes that they eat during the processions are the pepita with beef jerky, the baked cochito, almendrado mole and the chipilin tamales.

The people of the place can give you a reference where to find the artisans of the masks used by the Parachicos. It is an interesting 100% handmade process, there are few artisans who do this work and they themselves carve, paint and finish the Parachico mask . Paraboy masks have certain characteristics in style. For example, the mask of the Patron is the only one different from all those of the Parachicos, as it is smiling and shows its teeth. The mask of the Pattern has more than 200 years circulating from generation to generation. A highly valued piece that is protected from one year to the next with great care and secrecy.

It is also interesting to see how the monteras work, which are the hats used by the parachicos, another handicraft work that is made with ixtle, a natural product of the area. Something very representative and characteristic of the Parachicos. There is no parachico without a mask, montera, jorongo and their chin-chin, which is the brass rattle with which they dance.

7.- Witness a day of the dead in January.

8.- See the parade of floats and chuntás .

One day before the closing of these festivities, the parade of floats and Chuntás is organized in the afternoon. The streets are filled with Chiapanecas and Chuntás. The origin of the Chuntás or Chuntaes (from Chiapas serfdom) is said to have been when the men of the town disguised themselves as women, imitating the serfdom of María de Angulo, the rich landowner who came to town to bring them out of famine. Men, children and women are dressed in the streets in these costumes. This tradition is celebrated with great respect, they put on makeup, and they dress like a woman from Chiapas. On the streets, you can see women helping men to put on makeup. Entire families can be seen all dressed alike. During the parade, they distribute sweets or fruits or vegetables as part of their offering.

9.- Witness the night of the combat in the river.

On January 21 at night is the Combat on the Grijalva River. There is a parade of boats that simulate the combat that took place on the river when the conquerors came with the Chiapas. There are several places along the river where you can dine and watch the fight, or rent a chair to see it from a good angle. There are also many little places where local people go to see it from the shore, where there are no crowds and you don’t have to pay either.

10.- Witness the change of prioste.

In some parts of the town a saint is changed of place, this is called the change of prioste. Witness the change and all the ritual when preparing the exit of the image of the saint, be it San Antonio Abad, Nuestro Señor de las Esquipulas or San Sebastian Martir. There is a procession and they take it from one place to another while they dance parachicos, chiapanecas, play drums and the whistle. The most monumental change of prioste is on the 23rd, the last day of the big festival when Saint Sebastian is taken to the church for mass and the change ceremony, and then the festival closes with the procession to the house where the Santo is going to stay throughout the year until the next big party. This is a very emotional party because the parachicos dance and say goodbye to the party, they “cry” because the party is over,

Without a doubt, this is a little-known festival at the national level, it is a tradition worth living once in a lifetime. You learn, you know, experiences are filled and it is a place you will always want to return to.