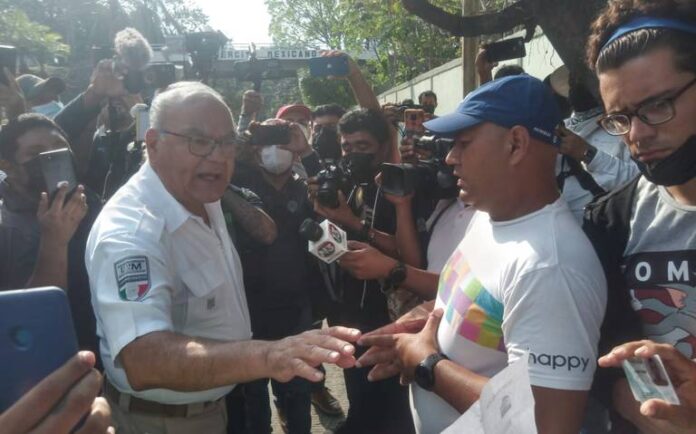 TAPACHULA, CHIAPAS — For weeks, this city near Mexico’s southern border has been roiled by near-daily protests by migrants frustrated over the long wait for documents from Mexican authorities that would allow them to continue traveling north.

On Friday, March 11th, one of those protests appeared to pay off.

About 150 migrants shouting outside a military base where President Andrés Manuel López Obrador gave his daily news conference, were told they would receive humanitarian visas before the day’s end.

That came a day after immigration authorities said they had given similar documents to some 800 migrants in the city ahead of the president’s visit.

Migrants from Central America, as well as Venezuela, Cuba, and other nations walked to the base where López Obrador was speaking carrying large wooden crosses. A woman who simulated a crucifixion fainted.

“We don’t want to stay here in Mexico,” said Roberto Báez Castillo of Cuba. “The final destination is to continue to the United States. So they have no right to hold us here, to practically have us kidnapped because they can’t give us a pass or humanitarian visa.”

“Since no one has helped us, we want the president to give us a solution, pull us out of this pit,” Báez said.

A short time later, a high-ranking immigration official appeared to do just that.

Héctor Martínez Castuera, a director-general for an agency within the National Immigration Institute, came out of the base to calm the protesters. He said officials would make a list of everyone with name, age, nationality and he promised to keep families together. “Today we’ll be giving you the cards,” he said.

The migrants expressed concern, some saying that they had received such papers before, but when they traveled north, officials in other parts of the country detained them and sent them south again.

López Obrador didn’t directly address the migrants protesting outside Friday, but he repeated his desire to expand Mexican social initiatives to Central America to reduce the economic pressure to migrate.

He also said that he would visit several Central American countries in May.

For the past couple of years, Mexico has used a containment strategy that involved trying to keep migrants confined to the southern part of the country, far from the U.S. border.

Migrants enduring lengthy waits for asylum requests or other attempts to regularize their status have attempted to walk out of Tapachula en masse only to be stopped later by authorities. They complain that there are few work opportunities in the southern city and with many facing debts incurred to get this far, they can’t afford to be idle.