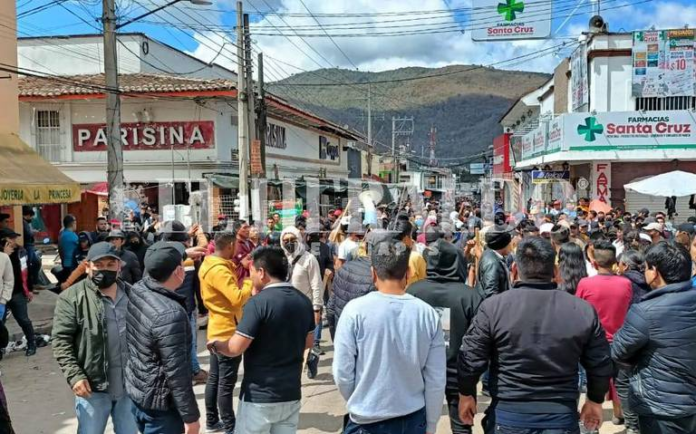 The leader of the ALMETRACH arrived at the market to try to collect the floor fee, which caused the brawl.

Faced with the dispute over spaces in the José Castillo Tielemans public market located in the northern area of ​​San Cristóbal de Las Casas, tenants of this supply center clashed with sticks and stones defending, according to them, the spaces they have had for more than 30 years.

It all started when, presumably, Narciso, leader of ALMETRACH, arrived at the aforementioned market to try to collect flat fees from his members and independents who have their premises in the public market, as well as from street vendors.

During the melee, detonations of firearms were heard, which motivated the owners of businesses in front of the Santo Domingo market and pedestrian walkways to close the doors of their businesses, because in this type of excess the indigenous people vandalize the businesses.

Faced with the dispute over spaces in the José Castillo Tielemans public market located in San Cristóbal, tenants of this supply center clashed with sticks and stones / Photo: Gilberto Morales | The Herald of Chiapas

So far, more than a thousand people are gathered in front of the supply center to prevent the other ALMETRACH group from arriving again and taking control of the market.

One of the tenants in an interview said that the problem of Narciso he and his people want the public market to be remodeled in its entirety, while the other group does agree but that it be the remodeling in parts so as not to affect the interests of each tenant.

Finally, the State and municipal police have not been able to enter the market because it would provoke more people and there could be a confrontation as it has caused in previous years.