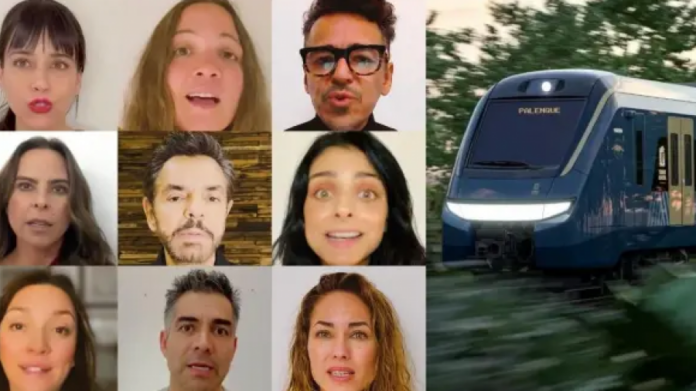 “They are conservative and fifis”: AMLO criticizes celebrities and activists for the campaign against Mayan Train

President Andrés Manuel López Obrador attacked celebrities and activists, who joined a campaign by the Greenpeace Mexico organization, called ” Selvame del Tren “, against the recent change of route in the construction of the Mayan Train .

In the morning conference held at the National Palace, López Obrador accused those who participated in the NGO campaign as ” conservatives ” and ” fifís “, in addition to questioning them “where were they” when governments of the neoliberal period “hurt Mexico ” in environmental matters.

Now it is the Mayan Train. They convince or hire artists to be pseudo -environmentalists, supposedly concerned about the defense of the environment, and they start a campaign against the Mayan Train”, he declared.

“When did these artists, pseudo-environmentalists, speak out for the destruction that was going to be carried out on Lake Texcoco? When? We are talking about the lake with the most history, which is the origin of Mexico-Tenochtitlán? When did they say something? Never, nothing,” she explained.

When did they say something during the neoliberal period that the governments handed over 60 percent of the national territory for mining exploitation, 120 million hectares? (…) Now it turns out that they scratch their clothes. They are very conservative, it is a campaign against, they are fifis, “he said.

That campaign arose due to the modification of Section 5 South of the train, which, they say, would destroy the largest underground river system in the world and with it flora and fauna.

They accused that the changes were made without consulting the public or carrying out the respective impact studies.

The Mexican president replied that the Government of the Fourth Transformation does carry out actions in favor of the environment in the areas where said priority work is being built at the federal level.

“First, we are planting trees like never before on the entire Mayan Train route, 200,000 hectares of trees, and the gap that is opening for a 50-kilometer section is the equivalent of 10 hectares and we are planting 200,000 and they are creating in the southeast three parks of 18 thousand hectares, natural reserves”, he declared.

“There is a Tulum because of a thousand hectares, the Jaguar Park; The Calakmul reserve is going to be expanded and in the archaeological zone of Uxmal, 2,200 hectares of reserve”, he added.

The Mayan Train is a priority project of López Obrador with an investment of around 200 billion pesos to build about 1,554 kilometers of railway in the five states of the southeast: Chiapas, Tabasco, Campeche, Yucatán, and Quintana Roo.

The work of the Federal Government has been criticized by indigenous organizations and groups in the area due to its environmental impact in the region.

A new migrant caravan leaves from the Mexico-Guatemala border