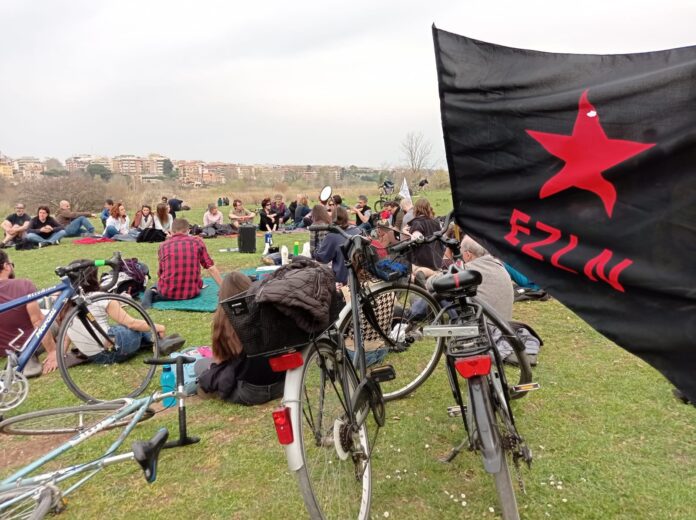 In the Caffarella Park in Rome, Italy, activists and groups met to spread the problems and struggles led by the indigenous peoples of Mexico and denounce the threats in other countries such as Kurdistan, within the framework of the Caravan for Water and Life that began last March 22 in Puebla.

During the meeting, organized by groups such as LAPAZ Roma and the Berta Cáceres Self-managed Laboratory, the ReCommon association denounced the eviction of the Casa de los Pueblos Altepelmecalli perpetrated by the National Guard and the municipal police of Juan C. Bonilla, Puebla, against the communities Nahuas who defend water from looting by the Bonafont company, as well as the struggles against AMLO megaprojects of the Mayan Train, the Morelos Integral Project, the Transisthmian Corridor, and the Dos Bocas Refinery.

For their part, members of the Solidale Node read a letter sent from the Cuxtitali district of San Cristóbal de las Casas, Chiapas, in which the defense of water against privatization and the dispossession of companies such as Coca-Cola, Chiapas, was explained. as well as the self-management of the water distribution system in the Barrio Bravo community.

In addition, Italian activists from Romano Acqua Pubblica denounced how the government is about to approve a privatization project for local public services, despite the fact that eleven years ago a popular referendum showed that 90 percent of the population was opposed to the proposal.

Finally, members of the Ararat Cultural Social Center, from Kurdistan, exposed how the Turkish government built a dam without a preliminary study on the environmental impacts, destroying natural and archaeological-cultural assets.

The activities in Rome were organized within the framework of the Caravan for Water and Life that the peoples of Mexico began on March 22 to make visible the struggles against territorial dispossession, megaprojects, and violence against communities in Mexico.

The US insists to migrants: do not enter through Mexico, the border is not open