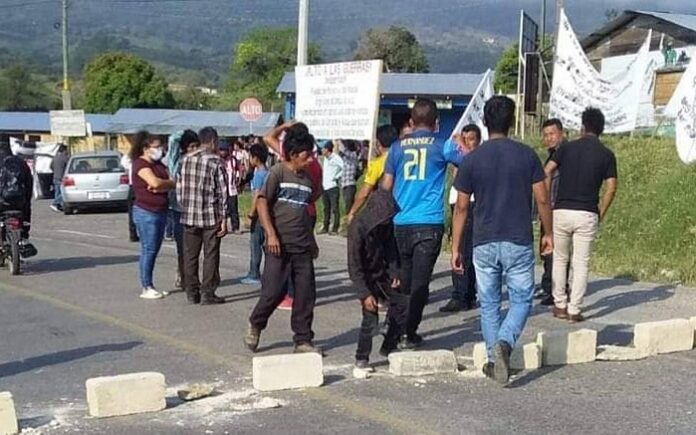 Residents of Ocosingo, Chiapas, blocked the highway to Palenque on Wednesday, April 13th, to express their discontent about an unresolved land dispute.

Disgruntled residents used heavy machinery to dig at least one trench across Federal Highway 199 and also utilized felled trees to block the highway in the same location in El Contento, a small community in Ocosingo, a large municipality in eastern Chiapas that borders Guatemala.

The blockade was erected to protest an agrarian conflict that dates back to 1994, the newspaper Reforma reported. Land disputes are common in the southern state.

The Chiapas Attorney General’s Office said Thursday that the protesters had disarmed and detained the Ocosingo municipal police director, a deputy director, and 15 officers. They also seized two police vehicles and four pickup trucks owned by the Mexican Social Security Institute (IMSS). No IMSS personnel, who were transporting medicines and medical supplies, were injured or detained, the institute said.

The highway blockade has affected Chiapanecos, as people from Chiapas are known, as well as tourists on Holy Week vacations in the southern state. Ocosingo is about 120 kilometers south of Palenque, home to the Mayan archaeological site of the same name, and just under 100 kilometers northeast of San Cristóbal de las Casas, a colonial city popular with tourists.

One tourist complained about the blockade on social media. “Friends, we had a bad experience yesterday on the Ocosingo-Palenque highway,” Facebook user Sharo Macc wrote Thursday, adding that she had to travel on a dirt road “that doesn’t appear on Google Maps” in order to continue her trip through Chiapas.

Carlos Huerta, who is traveling with 28 people on a bus tour that left León, Guanajuato, earlier this week, told Reforma that their plan to visit Palenque was stymied by the blockade. “The highway was wrecked with trenches, so people couldn’t pass,” he said.