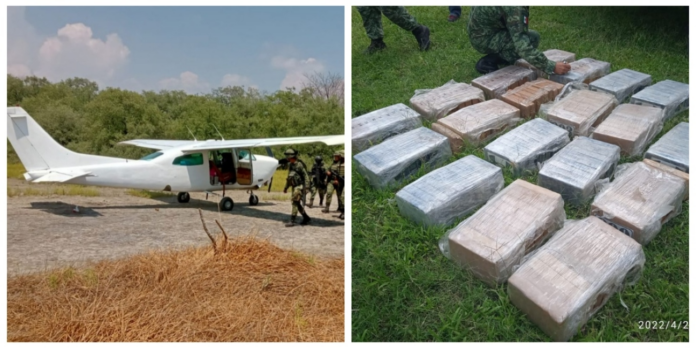 The suspicious aircraft landed 23 kilometers from Pijijiapan, and its crew boarded some boats fleeing in an unknown direction.

Last Sunday, April 24, in Pijijiapan, Chiapas, elements of the Mexican Army and Air Force detected and seized an aircraft from South America, inside which there were 9 bags of black synthetic material, covered with tape. adhesive with an approximate weight of 312.4 kilograms of possible cocaine.

The Comprehensive Air Surveillance System of the Ministry of National Defense detected an unidentified aircraft from South America, for which it alerted the Reaction Forces of the Army territorial commands located on the southern border of the country, reported the Secretariat of National Defense (Sedena).

Additionally, it ordered the Mexican Air Force to take off an EMBRAER EMB-145 aircraft, two TEXAN T-C6+ aircraft and a BLACK HAWK UH-60M helicopter; Likewise, it coordinated with the National Guard, the support of another helicopter to monitor and provide security to the national airspace.

Due to radar contact and later visual contact, it was observed that the suspicious aircraft landed 23 kilometers from Pijijiapan, and that its crew boarded some boats fleeing in an unknown direction.

UH-60 helicopters arrived at the landing site, transporting the heliborne reaction force and a ground reaction force with elements of the Mexican Army, who inspected the suspicious aircraft.

The insured was made available to the competent authorities. With this assurance, the Mexican Army and Air Force have already intercepted 115 illicit aircraft during the current administration.