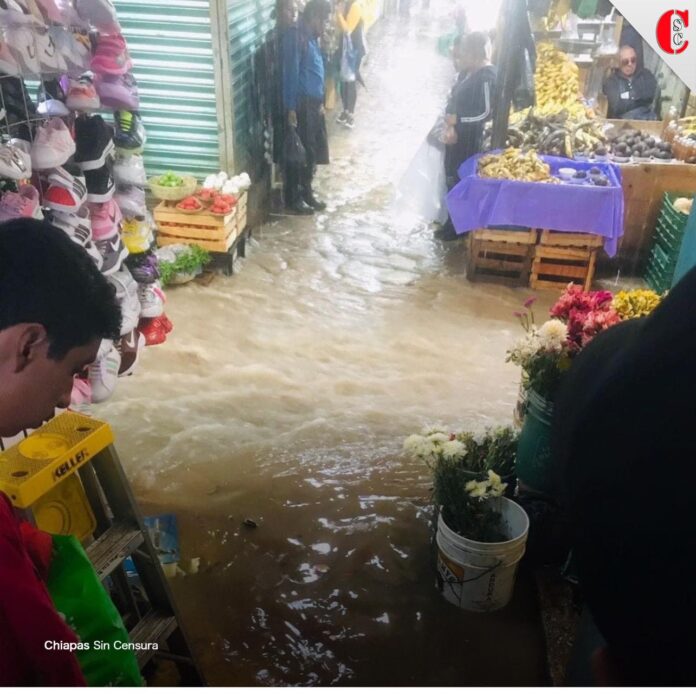 The rains caused the sewers drains of this mercado center to be covered, causing the flooding.

Traders and customers were trapped in the middle of the sewage.

Witnesses denounced that rats can be seen on the roof.

Rains recorded in the last hours have left a woman lifeless in Comitán de Domínguez, who was dragged by a stream of water, as reported by the Civil Protection Secretariat of said municipality.

An 80-year-old woman died this Saturday afternoon when she was swept away by the water current, after whipping heavy rain with wind and hail.

This event occurred at 6:30 p.m. on 1st Avenida Poniente Sur in the San Sebastián neighborhood in the municipality of Comitán.

Relatives reported what happened to 911, so elements of Civil Protection, paramedics and police elements immediately arrived.

According to the data collected, the lifeless body of 80-year-old Maura Román Ortiz was found inside a sewer.
When the body was rescued, it was handed over to the family, who did not allow it to be transferred to the Forensic Medical Service (Semefo).

Likewise, damages were reported in homes with flooding, lifting of tin roofs, and falling trees.