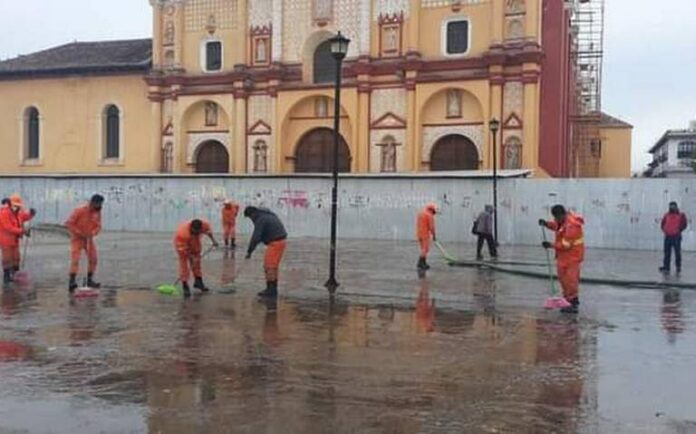 The closure of streets that caused the cleanup, caused annoyance among citizens due to the traffic that was generated

San Cristóbal de Las Casas, Chiapas.- Asked why the banks do not keep a healthy distance either, Pablo Reyes, Director of Civil Protection in San Cristóbal, replied: “people like to crowd, we distance them and then they crowd again, but well, there are our colleagues, but the difficult part was through the Telecom offices, on the street, because not only does the beneficiary come, but the whole family is brought ”.

“We are demanding the use of face masks so that they do not put other people at risk, we speak with the neighbors of the Historic Center, we ask for their understanding, and we are supporting, cleaning is done starting at 6 in the morning, we put soap, chlorine, many people relieve themselves and that was the complaint of the neighbors, “he said.

And it is that as if it were a high impact action, the City Council of this city boasted in social networks the cleaning of several streets that make up the Central Park after in recent days they were exhibited for not putting order in the areas where many go people to collect support from the Federal Government.

“Municipal Clean Personnel clean and wash the Plaza de La Paz, which in recent days has received hundreds of visitors from different communities who charge for federal programs in the City Center,” they wrote on their social networks, where users “branded” the City Council even as racist.

The closure of streets that caused the cleaning, caused annoyance among citizens due to the traffic that was generated, since they consider this activity could be carried out at night, without harming anyone. In this regard, Pablo Reyes Aguilar, director of Municipal Civil Protection, justified that the idea of ​​cleaning was from the residents of the Historic Center.

“We have realized for a few days that people have come to collect federal support, there are around 500 daily payments, the public is a little upset by the agglomeration of people, the Federal Government makes more than 30 thousand payments, because we are in during the electoral season, in April they cannot give even one more payment, and people should not stop their activities, especially those in the countryside, ”said the official.

Finally, he said that they have already reached an agreement with the Ministry of Welfare and all that attention will be given to the Municipal Sports Services, “that part has already been overcome and we hope there will no longer be crowds in the Center.”