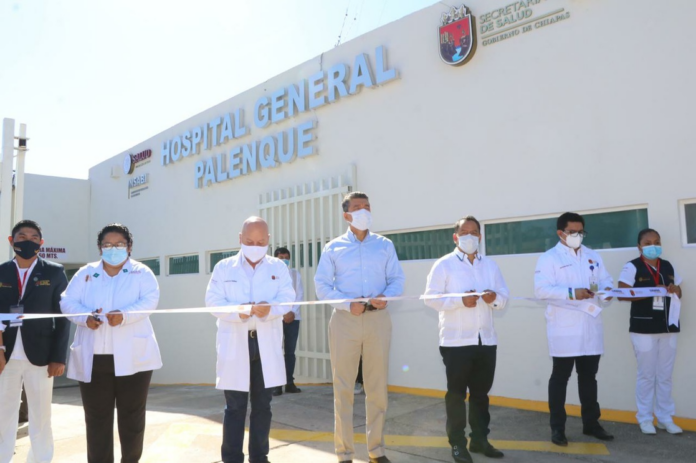 Chiapas. About 150 hospitals have been built, expanded or remodeled in Chiapas, mainly in the most remote communities, in the last two years, reported Governor Rutilio Escandón Cadenas.

During the inauguration of the reconversion of the General Hospital of Palenque and the tomography for that center, he said that “from the beginning, we set out to invest in everything that represents a human right, such as health, education and other items.”

He added that “with the example of President Andrés Manuel López Obrador we are working seriously, honestly and transparently in the generation of economies to attend to all the most sensitive causes and claims of the entity, forcefully fighting the corruption that for many years trampled the dignity of the people of Chiapas and Mexico ”.

Accompanied by the honorary president of the Chiapas DIF System, Rosalinda López Hernández, he highlighted the commitment of his government to “continue to carry out efforts so that this hospital also has an MRI”, while acknowledging the human work that the health sector carries out in the face of to the pandemic due to Covid-19, as well as the resilient attitude of citizens ”.

He stated that the foregoing “has allowed Chiapas to remain green on the epidemiological risk traffic light and to have the lowest mortality rate in the country.”

Escandón Cadenas remarked: “We are not going to tire or slow down, we will continue working with a vocation for service and committed to the future and progress of Chiapas.”

At the time, the federal deputy for the 1st district of Chiapas, Manuela Obrador Narváez, recognized the effort that federal, state, and municipal authorities make to strengthen the health sector while reaffirming their commitment to continue being a manager of needs Priorities required by the citizens who live in the municipalities of the northern region of the entity.

The Secretary of Health, José Manuel Cruz Castellanos said that in addition to the search for security, tranquility, and dignity of the work of medical personnel, in Chiapas they invest in the comprehensive improvement of clinics and hospitals, in order to provide quality and warmth to the population and consolidate a functional health model.