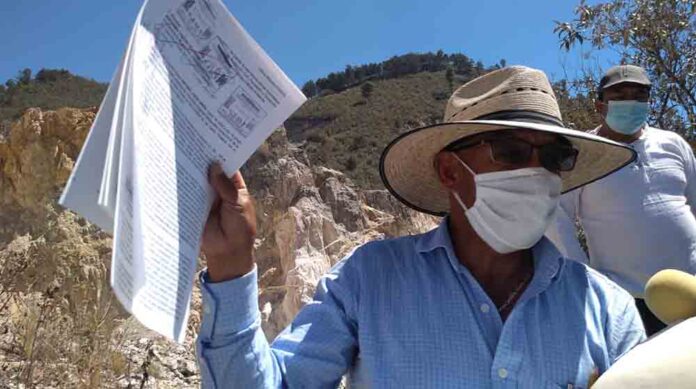 More than 50 inhabitants of the Salsipuedes neighborhood called on the competent authorities to pay attention to the sandbanks found in the upper part of this neighborhood, because the earth is “fracturing” due to the extraction of the stone. “and some homes are beginning to be affected, in addition to the environmental damage that is generated in San Cristóbal de Las Casas.

In an interview, Antonio López Girón said that his house, located on Calle Diagonal Salsipuedes number 4, has cracked due to the vibration of the machinery that begins to work from 5:00 a.m. to 6:00 p.m., for What he asked the authorities for a relocation, since 15 years ago he bought the land and occupied the space, the problem did not exist.

“The house is 9 by 8 and a half, I have been living here for about 15 years, the hill was complete, but little by little they came digging and since 2016 I am asking for support from the authorities, but nothing has happened, they have even Authorities and deputies have come, but just to take a photo with me, they are not really interested in the environment, they have ignored it, little by little they were finishing it, my house is already damaged, it has cracks and it is the only heritage we have “, he denounced.

For his part, Domingo López stated that there is already a civil protection opinion but there is no solution for his neighbor, in addition to the fact that this problem involves the general public, since the extraction of the stone affects the environment, since they remain very few hills with trees, in a few years they have devastated the vegetation of the place, for which the authorities must take action on the matter.

“The opinions say that there are fractures, the family is in total risk, the trades have been in for a long time and nothing happens, the technical opinion issued on August 21, 2019, says that they have found that there is a fractured ravine which It represents a risk for the inhabitants, but they have not done anything, “he said.

Finally, López Girón, demanded that the environment and civil protection authorities take all the necessary measures since the house that is in danger could collapse and there could be human losses.