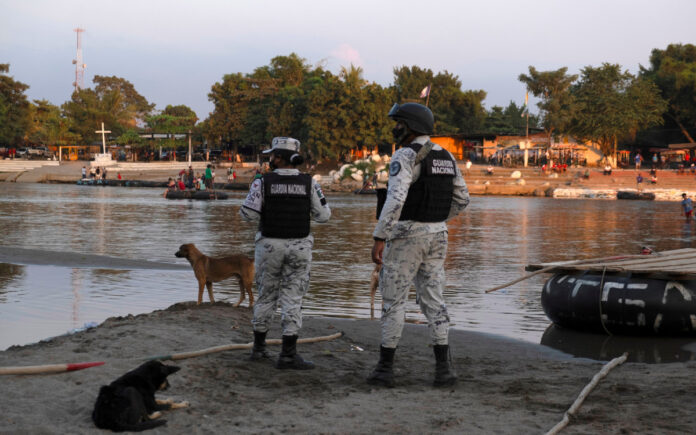 “The operations will be more frequent, more continuous and we will be participating” from next week, revealed a member of the National Guard

Mexico is preparing to significantly reinforce efforts to stop migrants illegally crossing its border with Guatemala in response to the increase in the number of people trying to enter the United States, according to four people familiar with the matter.

The United States government said this week that it is facing the largest increase in migrants at its border with its southern neighbor in 20 years, presenting authorities with a great challenge and raising concerns within the Mexican government.

People familiar with the plan explained that Mexico would deploy security forces to cut off the flow of migrants, most of whom come from three poor and often violent Central American countries whose economies have been hit during the coronavirus pandemic – the so-called Northern Triangle from El Salvador, Guatemala and Honduras.

Two of the people indicated that the National Guard, a militarized police in Mexico that led efforts to reduce the number of migrants during a surge in 2019, would be at the forefront of the containment campaign.

“The operations will be more frequent, more continuous and we will be participating” starting next week, revealed a member of the National Guard, who spoke on condition of anonymity.

Those people did not elaborate on the plan, but similar operations in the past have focused on a narrow isthmus in the south of the country, rather than trying to stop all border crossings with Guatemala, where remote and difficult terrain complicates efforts.

Migration authorities are already picking up migrants without proper documentation in the southern city of Tapachula, near the border, the National Guard officer said.

The Mexican National Institute of Migration said it had no information on the matter. The National Guard and the office of President Andrés Manuel López Obrador did not immediately respond to a request for comment.

When asked about the Mexican plan, a spokesman for the US State Department stated that his country appreciated Mexico’s efforts to stem the flows and aimed to continue close cooperation.

The official declined to comment on specific operations and did not respond to a question about whether Washington had requested such action or was aware of it in advance. The White House did not immediately respond to a request for comment.

After taking office in December 2018, López Obrador created the National Guard to take care of internal security but ended up deploying thousands of his troops to stop migration under pressure from the former president of the United States, Republican Donald Trump.

Trump’s successor, Democrat Joe Biden, has taken a more humane approach to immigration policy. But the surge in arrivals since he took office in January has tested US officials and drawn strong criticism from Republicans.

Within the Biden administration, a sense of urgency has grown amid pressure on the situation at the US-Mexico border, especially from the growing number of unaccompanied minors detained there.

In Washington, a person familiar with the matter said the new US administration has seen a growing need for the Mexican government to do more to secure its southern border but has steered clear of making demands or direct requests for action.

Biden’s aides want to avoid Trump’s heavy-handed approach to Mexico, preferring a more respectful tone on the divisive issue of migration, but bilateral discussions have addressed how to stem the flow from Northern Triangle countries, the source said under condition of anonymity.

Mexican officials had anticipated a sharp escalation in immigration under Biden, and one sadly noted last month that it would force Mexico to “go back to being the bad guys.”

The rise in illegal immigration has created a lucrative business for criminal organizations within Mexico, which is already dealing with near-record levels of homicides, according to authorities.