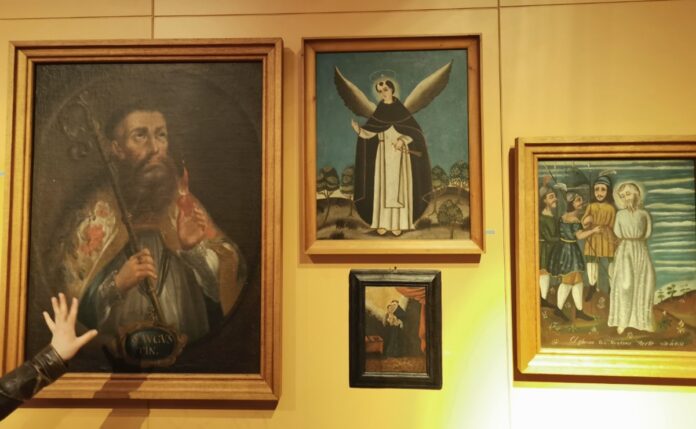 The 29 oil paintings from the 18th and 19th centuries will be placed for display in the municipal archive building; they spent 35 years at the INAH for its restoration

San Cristobal de las Casas, Chiapas.- A batch of 29 oil paintings from the 18th and 19th centuries, which for 35 years were in the possession of the National Institute of Anthropology and History (INAH) for their restoration, was returned to the San Cristóbal de las Houses on the eve of the commemoration of the 493 anniversary of its founding.

The symbolic delivery of the artistic heritage was last weekend, during a ceremony headed by the mayor Jerónima Toledo Villalobos and the director of the Cultural Center of the Highlands of Chiapas, Raúl Durón León.

The works that represent elements of the historical, religious and cultural identity of San Cristóbal de Las Casas, will be placed for display in the municipal archive building .

Authorities scheduled that by March 30, one day before the 493rd anniversary of the founding of San Cristóbal de las Casas , the oil paintings will already be on display to the public.

The city council of that city in the high region of Chiapas indicated that the pictorial legacy was handed over to INAH on August 7, 1986, for its artistic restoration.

In the period 2008 and 2010, the works were sheltered in the cellar of the Chiapas Regional Museum, in Tuxtla Gutiérrez, due to the remodeling work in the former convent of Santo Domingo de Guzmán de San Cristóbal de las Casas, where they later returned to his exhibition in 2011 and 2012.

On October 29, 2019, through the municipal receivership, the council opened the procedures to require the return of the oil paintings.

Toledo Villalobos, who last Monday requested a 15-day license to search for an electoral position for Morena, said that the works were already at the disposal of the city council.

And that also “is in the process of placing them in the municipal archive, and the best conditions recommended by the INAH are generated so that they do not deteriorate, with adequate ventilation and temperature.”

Gaspar Morquecho Escamilla, his advisor, carried out “important” work in the management for the return of the 29 works to the general director of INAH, Diego Prieto Hernández, “since he found out that we made the request,” Toledo Villalobos commented.

He pointed out that with the return of the pieces of art, an important cultural wealth that is recovered for the municipality, “we have received comments from the Citizen Council of the Historic Center, for example, which recognizes the effort, willingness and sensitivity of the INAH, which he agreed to deliver them already restored, “he finally said.