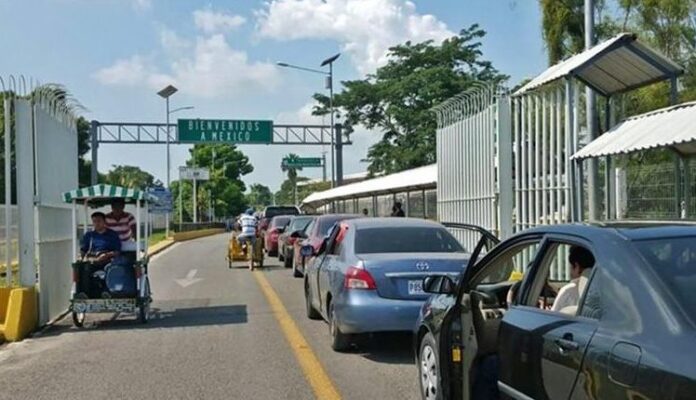 In addition to border restrictions for non-essential travel, the Mexican government will deploy sanitary control measures in the north and south of the country.

“To prevent the spread of covid-19, Mexico will impose as of March 19, 2021, restrictions on land transit for non-essential activities on its northern and southern borders,” the Foreign Ministry detailed on Twitter.

In addition to border restrictions for non-essential travel, the Mexican government will deploy sanitary control measures in the north and south of the country; However, the SRE did not give more details about what they consist of,  “the restrictions on non-essential traffic and sanitary measures will remain in effect until 11:59 p.m. on April 21, 2021, ” he said.

The United States Department of Homeland Security reported that measures to prevent the spread of the new coronavirus in its territory will also include non-essential travel restrictions on its border with Canada.

On March 4, the United States issued an alert to its citizens to consider not traveling to Mexico in the season known as spring break ( spring break ) that runs until April, in which thousands of young people visit tourist destinations, generally from Beach.

“US citizens should reconsider spring break and other non-essential travel to Mexico due to covid-19. Cases and hospitalizations remain high in most of Mexico,” the health and safety alert issued to Mexico said. beginning of the month by the United States embassy in Mexico.

Vaccines in exchange for stopping migration?

This tightening of measures on the southern border of Mexico coincides with the increase in irregular migration of citizens from Guatemala, Honduras and El Salvador to the United States, who have even sought the “American dream” in caravans.

Mexico’s border closure measure coincides with the announcement made by the United States on March 18 in which it announces that it plans to send millions of doses of the AstraZeneca covid-19 vaccine to its neighbors Mexico and Canada.

2.5 million doses are expected for Mexico and 1.5 million for Canada, reported Jen Psaki, press secretary to President Joe Biden, without specifying the dates of shipment.about:blank

Jen Psaki, White House Press Secretary, was asked by journalists if the delivery of these vaccines was linked to the cooperation of the Government of Mexico to stop migration and replied that there are several diplomatic conversations, parallel conversations, various levels of conversations with various countries like Mexico, Canada, Europe, Asia, around the world, all in order to avoid the spread of the global pandemic and that this is one of the diplomatic objectives.

“Another of our diplomatic goals is to work to counter the challenges at the borders, so it is not surprising that these two conversations happen,” said Psaki.

Biden resumed on February 19 the processing of 25,000 asylum seekers returned to Mexico under the Migrant Protection Protocol (MPP), known as “Remain in Mexico”, established by the previous president, Donald Trump (2017-2021).

The United States is heading to see more migrants on the southwest border with Mexico than it has encountered in the past 20 years, but it expels most adults and family groups.

The U.S. Customs and Border Protection (CBP) reported the arrest of 100,441 undocumented migrants in February, up from 78,442 in January.