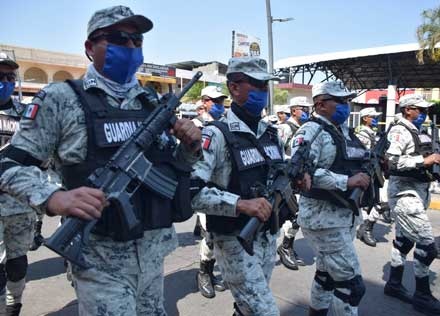 San Cristóbal de Las Casas, Chis.  The governments of Mexico and Guatemala announced that they will use thousands of soldiers, immigration agents and police to contain migration at the southern border and combat human trafficking.

During the presentation of the groups organized, equipped and trained for humanitarian rescue on the southern border, held in Tapachula, he reported that from the beginning of January to March 25, “we have identified more than 34,993 travelers in irregular migratory condition. throughout the country, 7,643 more than in the same period last year ”.

He added that “last week about 4 thousand undocumented people were located, of which half entered through Chiapas and the Tabasco border.”

The government of Mexico “has the obligation to guarantee a regular, orderly and safe migration, for which reason“ we will maintain a 24-hour surveillance operation throughout the entire southern border of the country, as well as on the roads, trains of cargo and lost roads, to maintain a regular migratory flow, also taking into account the measures by Covid-19 “.

The Vice Minister of Foreign Affairs of Guatemala, Eduardo Hernández, pointed out that the government of his country is simultaneously deploying the Army, the National Civil Police and the Guatemalan Migration Institute, on the dividing line with Mexico.