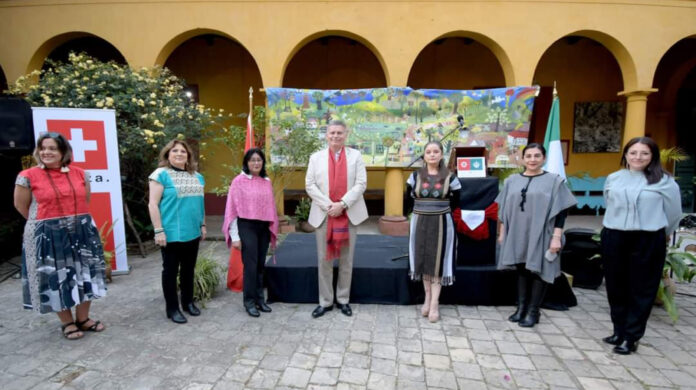 San Cristóbal de Las Casas, Chiapas.– The to Mexico, Eric Mayoraz, led the celebration of Gertrude Duby at the Na’Bolom museum, within the 70th anniversary of the founding of the Na’Bolom Association.

During the ceremony, the relevance of Gertrude Duby, of Swiss origin, founder of the Na’Bolom Museum, was highlighted: “Courageous woman who with her journalistic profession, with her photographic skills, with the social work that characterized her as a human being, managed to document the life of the Lacandons and evidenced the depredation of the jungle region of southeastern Mexico ”.

Eric Mayoraz, Swiss Ambassador to Mexico and Belize, thanked the authorities for the welcome and support provided during his working tour of the city and recognized that tourism is a very important sector between his country and Mexico: “Switzerland depends a lot of tourism since it represents 7% of the GDP and before the pandemic, there were around 60 thousand Swiss who visited Mexico and Chiapas ”.

After the tour of the facilities of the Na’Bolom Museum, the diplomat said he was pleased with the visit and what Trudy represents (as Gertrude Duby was also fondly called) for San Cristóbal de Las Casas, “a very beautiful city and very important ”, he stressed.

On his first official visit to Chiapas, as part of the celebration of 75 years of diplomatic relations between Mexico and Switzerland, he visited the Nestlé plant in Chiapa de Corzo where an important investment was announced, as well as a meeting with the Secretary for Development of Indigenous Peoples and one more at the Fray Bartolomé de Las Casas Human Rights Center, where the situation of violence against women, in particular, but also the human rights situation in Chiapas was addressed.

He was accompanied by Anita Müller, Attaché for Political and Sectorial Affairs; Christian Michel, general director of the Swiss-Mexican Chamber of Commerce and Industry; Luisa Lea, Nestlé Corporate Affairs; José Luis Flores, manager of Zurich-Chiapas; Daniel Gordillo, Manager of Corporate Affairs for Regal Springs; On behalf of the state governor, Matza Maranto, general director of the State Council for Cultures and the Arts, attended.

On December 22, 1945, through an exchange of notes and the issuance of a joint communiqué, Mexico and Switzerland established diplomatic relations with which historical ties between the two countries dating from the first half of the 19th century were made official.