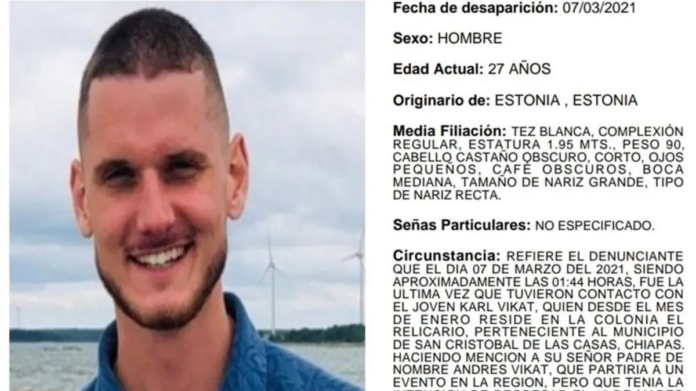 Karl Vikat, a former diplomat of the European Union, disappeared since last March 7; his parents waited for his return to Estonia

Chiapas, Mexico.-  Karl Vikat, a young man of just 27 years of age and former political attaché of the Delegation of the European Union in Honduras, has disappeared in the state of Chiapas.

His search has been released by the Chiapas State Attorney General’s Office and shared on social networks by activists who have requested help to locate him.

According to what was related by the relatives of the man from Estonia, he disappeared on March 7, however, it was only on March 31 that the Chiapas State Attorney General’s Office issued a search form.

Since 2020 Karl Vikat began living in Mexico, a country where he began to work as a language teacher.

Until last January, the diplomat had his home in Colonia Relicario, in the municipality of San Cristóbal de las Casas, but since 1:44 a.m. on March 7, he lost track of him.

Andrés Vikat, Karl’s father, said that his son informed him that he would be leaving for an event in the region, but that, according to his plans, on March 15 he would travel to his country of origin.

In Tallinn, the capital of the Republic of Estonia, his loved ones have eagerly awaited him, but the authorities have yet to report any progress on his whereabouts.

Prior to this publication, the Twitter account Amber Alert and Odyssey Mexico unofficially spread the news that the former diplomat of the European Union had already been located, however, when consulting the social networks of the Attorney General’s Office of the Chiapas State, no official information was found in this regard.