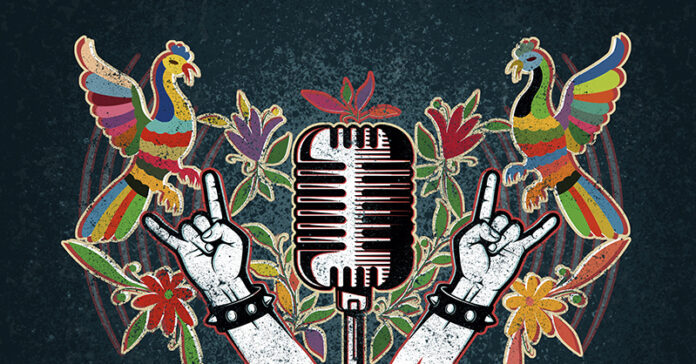 Bats’i ‘is a series of radio capsules made in Tsotsil Mayan and Spanish, which offer a journey through the history of rock bands from Chiapas sung in the Bats’i k’op language.

The history of rock in Mexico represents a struggle against silence and censorship, as well as rebellion and the concern of young people to raise their voices and make their demands known. However, in Los Altos de Chiapas, it has also meant a right to be able to demonstrate and not to devalue its artistic expression.

Since the 1960s, this movement was developing with groups such as Los Reyes Criollos and Los Skinis, who performed covers of Los Locos del Ritmo and Los Teen Tops. It was until 1996 when the first rock proposals in Tsotsil Maya emerged with bands like Sak Tsevul (Zinacantán, Chiapas), which means “lightning,” and a band from Sonora that played heavy metal in the Seri language, Hamac Caziim.

Community radio allowed these two proposals to transcend and make their music reach a national level, managing to raise the memory of native peoples, their history, and tradition through music.

A little heard voice, that of the musicians themselves, is exposed thanks to the work of Anahí Minor, a graduate in Language and Culture from the Intercultural University of San Cristóbal de las Casas, Chiapas. Her taste for spreading the native languages ​​made her work, for almost two years, the Bats’i ‘rock project, a series of radio capsules in Spanish and Tsotsil Mayan, in order to make a record of all the bands.

“Something important that is emphasized in the capsules are the stereotypes that arise with the bands, because, to begin with, they are classified as indigenous rock or etnorock, and what is clarified is that it is a human right to be able to express yourself in your language and only You must call him rock in tsotsil; It is like saying rock in Spanish or English, because to categorize as indigenous rock is to separate what is or is not indigenous and falls into a contradiction ”, clarifies Anahí.

What the initiative seeks is to revalue the bands and that they are not listened to from a folkloric point of view, but rather that the artistic performance of the young people is appreciated. That is why Minor claims that the best way to call this movement is rock en tsotsil or bats’i ‘rock.

“They told me in the interviews that they heard racist comments or felt like they got to see them because they spoke in Tsotsil or wore their traditional costumes, which not everyone does, and not everyone uses the instruments of their community. Some, maybe out of respect ”, he clarifies.

The first contact he had with the groups was during the festival De tradition y nueva rolas, organized by the State Council for Cultures and the Arts ( CONECULTA ). This meeting was a key point for the investigation, since it allowed Anahí to get closer to the gangs, mostly from the San Cristóbal de las Casas, Zinacantán, and San Juan Chamula communities, and thus conduct her interviews with the young people.

The announcer relates that one of the difficulties of the young musicians was the rejection of their relatives because they broke with the tradition of working in the fields or carrying out other activities within their communities.

“One of the objectives of the capsules was to give voice to youth identities, because contextualizing in the original communities, the opinions of young people are not taken into account, much less their form of artistic expression. At this time there is already a greater acceptance on the part of the adults and the elders of the community, but they did have to face many difficulties; Now, fortunately, most of the boys are already professional musicians, they dedicate themselves to it ”, he expresses.

There are even more conservative communities than others. “In San Juan Chamula there was a little more rejection because they are more jealous and very strict in terms of respect for their traditions, many times they looked at young people with a kind of mockery because some used certain songs that are typical of the community and that Adapting them to this genre has been a whole process that has also cost them ”, he indicates.

Currently, in Chiapas there are more than 10 active tsotsil rock bands that already have quite a long trajectory, some have more than 10 years of being formed and with independent recordings.

“The Sak Tsevul group, in this part of Chiapas, in the Upper Zone, was a school for all the bands that had been forming, they even received some of them to advise them and guide them on their musical trajectory. I could say that they have served as inspiration and motivation for more generations to continue in music, as it is very necessary ”, says Anahí Minor.

Young people take their instruments, take the stage and speak out, mainly, against the discrimination they suffer inside and outside their communities.

The message that they transmit in most of their songs, performed in bats’i k’op, is from the right to be able to express themselves in their languages ​​without being discriminated, from their culture and traditions, also from the damage that has been done to the environment, as well as their social experiences that have been lived within the community, such as injustices.

The series of capsules addresses six themes: the first is a semblance of the history of rock in Mexico, how this movement arose in Chiapas and the first bands of the seventies.

Subsequently, a space is dedicated for each group, which is enriched with interviews with the bands themselves, all through a trip accompanied by their own music.

The idea that it would be bilingual, both Spanish and Tsotsil, is to bring this message to people who have these stereotypes and stigmas about two things: being a rocker and being young. And a very important part that is empowering the word of the boys.

Another of the biggest challenges for Anahí was adapting to a bilingual radio format, since her mother tongue is Spanish, so she had to learn the native language.

I would like to make a documentary that portrays the 20 years of the emergence of tsotsil rock, there is a lot of material to do it

“My knowledge of tsotsil is not so vast as to make a translation or an interpretation, I think that was what cost me the most, to build these messages, which were well understood, not to change the context of the message that I wanted to give in the capsules. Most of my classmates, even teachers, accompanied me, because it is also very important to mention that the language has been transformed over time, many young people do not use words that the elderly used before, I always obtained two points of view from one adult and a young person ”, details.

This journey, which he made about a year and a half ago, between rock and tsotsil, was a great learning experience for Anahí.

Currently, he continues his research thanks to a grant from FONCA where, in addition to following the rock movement, he will talk about other genres such as rap, heavy metal, reggae and ska in the Tzeltal and Tsotsil languages.

“The experience was quite pleasant and cultivating because I learned many things about how they see these investigations that exist around indigenous youth, to know from their point of view, what they think of what they do, it was wonderful to know them, I was able to learn of the Tsotsil culture ”, he concludes.