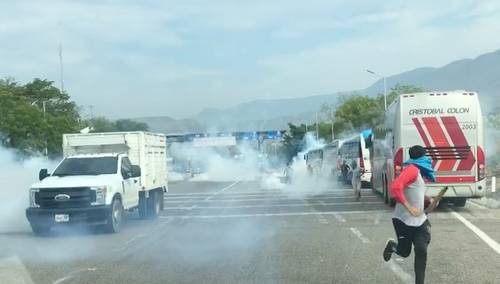 San Cristóbal de Las Casas, Chipas., The State Attorney General’s Office (FGE) reported that the Control Judge “qualified the detention as legal and an accusation was made” against 93 students from the Mactumactzá Rural Normal School, detained on Tuesday by the take of the toll road toll booth that connects San Cristóbal with Tuxtla Gutiérrez.

In a statement, he said that at the conclusion of the initial hearing on Thursday night, the Control Judge, whose name he did not disclose, “described the arrest as legal and an accusation was made” against 74 women and 19 men, accused of the crimes of mutiny, gang activity, robbery with violence, attacks against the peace and bodily and patrimonial integrity of the community and the state, and damages.

He added that “the precautionary measure of informal preventive detention continues” in the El Amate prison, located in the municipality of Cintalapa.

He pointed out that the students of the Mactumactzá Rural Normal School “accepted the duplicity of the constitutional term,” so the date for the continuation of the hearing was set for May 25 at 10:00 hours.

He recalled that “on May 18, at 2:00 p.m., a group of approximately 120 students from the Mactumactzá Rural Normal School blocked the passage” on the toll road, for which they were evicted by the state police, with a balance of 95 detainees, two of them minors, who were referred to the Prosecutor’s Office for Adolescents.