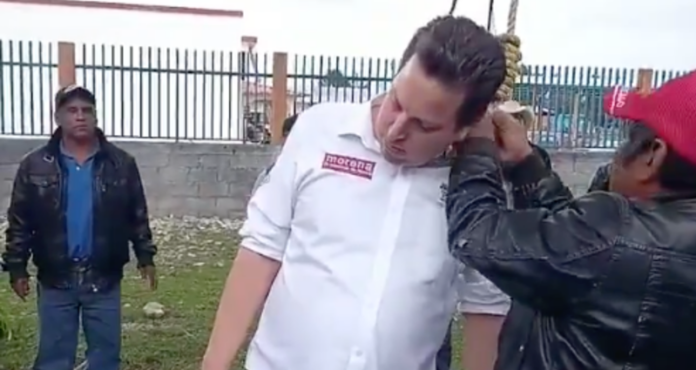 Tzotzil Indians literally put the noose around the neck of Salvador Camacho, who is the son of Manuel Camacho Solís and cousin of the ex-governor of Chiapas, Manuel Velazco, for failure to carry out works when he was a local deputy.

Although the event occurred last Sunday, it was until this Wednesday, May 19, that the episode was made known through social networks through a video.

On the appointed day, the candidate and 21 companions arrived for a scheduled appointment in the community of Los Llanos, about 20 minutes from San Cristóbal de Las Casas. According to sources consulted by EFE, the former local deputy arrived with the intention of publicizing his government proposal, but was held until supposedly paying a fine of 300 thousand pesos, which the residents set, “for breach of word.”

After what happened, at a press conference, Juan Salvador Camacho minimized what they did to him in Los Llanos, saying that he was released after an intense dialogue, denying that he had paid for his freedom.

“Although the images are very strong with the rope, I want to say that they did not hurt me, that there were not really direct blows towards me. Our adversaries want to decontextualize to attack my image, to affect me and evidently there are the tests, nobody would be willing to make a montage of that nature “, he declared.

In addition, in an interview with Proceso, he assured that it was the first time he had visited the aforementioned community and that he had never made any kind of commitment.

“They complained to me that no one from the current government had stopped in that community to attend to their claims such as a deep well, lack of basic services and other lags that the community has.”

“(That the current municipal government) had forgotten about this community; but they also made mention of all the municipal presidents who have undergone this important responsibility, in the sense that this community has historically been abandoned, “he said.