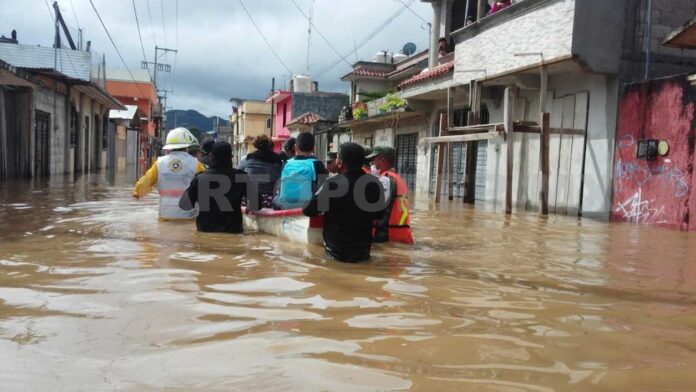 Because the 2021 Rain and Tropical Cyclone Season began on May 15 and will end in mid-November, the Secretariat of Civil Protection in Chiapas confirmed that in the state an average of 6,404 localities in 15 municipalities are exposed to the subsidence of the ground, which puts one million 858 thousand people in a situation of vulnerability.

The state agency explained that it is the Isthmus-Costa, Maya, Comiteca Tojolabal, Metropolitan, and Mezcalapa plateau regions that are under an unfavorable condition during the time that the rainfall lasts.

Other data offered by the Special Civil Protection Program for the 2021 Tropical Rain and Cyclone Season is that in Chiapas, between 1999 and 2020, 71 declarations have been issued that are related to hydrometeorological and geological phenomena.

What is sought with this strategy is to carry out prevention activities in the most vulnerable areas, awareness-raising work is also carried out among the communities, and dissemination material and recommendations on the consequences of rainfall have been distributed.

The plan includes keeping the public informed of early warnings and any eventuality that may occur.

For the Pacific Ocean this season the impact of 20 meteorological phenomena is expected; of that number, three are considered hurricanes with categories between 3 and 5. 10 also appear as tropical storms.

For the Atlantic (they begin on June 1) the impact of 18 disturbing phenomena is expected; Of that amount, three are expected to become category 3 to 5 hurricanes.

In order to identify the risks that exist in the municipalities, the Ministry of Civil Protection carried out tours in the areas where there are more risks of subsidence, landslides, and flooding.

Due to landslides, the entity has 45 municipalities in a vulnerable situation; These municipalities are part of the Selva Lacandona, Norte, Sierra Mariscal, Altos, and De Los Bosques regions.

As for the areas of high rainfall, the Ministry of Civil Protection pointed out that 41 municipalities are exposed to heavy rains and this also translates into 6,440 localities, which affect more than 1,858,000 people.

Regarding the impact of the gusts of wind, the state agency reported that 11 municipalities are the most vulnerable.

In Arriaga, the greatest risk lies in the overturning of vehicles and the detachment of roofs; These, added to the vulnerability of the collapse of trees and electrical wiring, can occur in Tonalá, Pijijiapan, Teopisca, San Cristóbal de Las Casas, La Concordia, Pichucalco, Amatán, Las Margaritas, Acapetahua, and Escuintla.