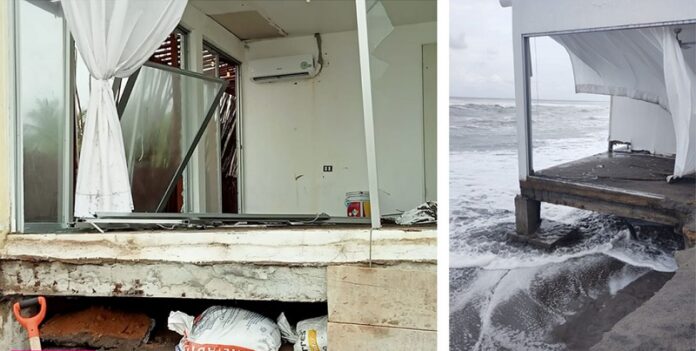 Municipal Civil Protection (PC) agents went to the “Tachisnaste” tourist center, located on San Marcos Island, Boca del Cielo, to monitor the construction which was seriously affected by the natural phenomenon in the Pacific Ocean.

The water entered their rooms and damaged the entire structure, and not even the bags of sand worked as a wall of protection against the strong waves.

It should be noted that this island of San Marcos, where the tourist center is located, is located next to Boca Barra, where the Living Sea meets the Dead Sea and the levels of the waves have gained ground on the island, where several owners have lost their palapas.

Likewise, the PC elements in charge of José Rivera Martínez, said that the strong waves and the effects of the intense rains continue.

The palapas near the beach have been destroyed and some service providers have been forced to close due to the effects on their businesses.

Civil Protection warned that the rains will continue and urged citizens to follow the authorities’ recommendations to avoid accidents.

Likewise, it is required to have a culture of recycling and placing garbage where it corresponds, since in many sewers remains of all kinds accumulate and that causes flooding.