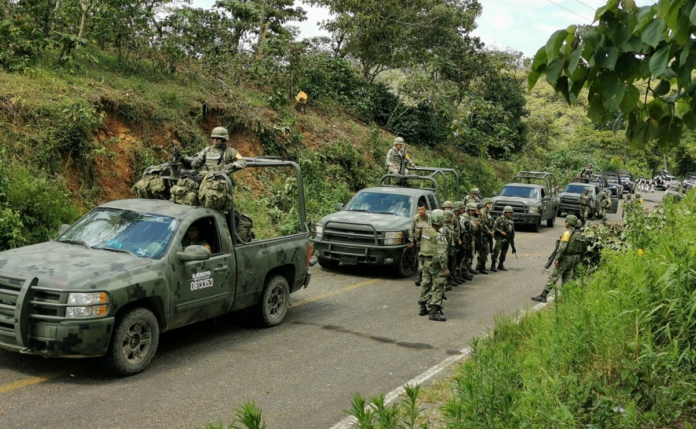 Pantelhó, Chis.- The National Guard, Army, and police corporations regained control of Pantelhó, which has become a desolate town since Wednesday when two armed groups collided for several hours and one of them ambushed a convoy of federal-state forces in La Thursday morning, which left six policemen and three soldiers wounded.

This Friday, the Tzotziles who live in the communities of Pantelhó and Chenalhó where the groups operated between Wednesday and Thursday, were still leaving their homes, fearing that new clashes would be registered.

In Pantelhó, the inhabitants congratulate themselves with the presence of the National Guard, Army, and Police, after several days of hostilities and asked that the uniformed men now “stay permanently”, in order to achieve tranquility in this municipality located about 48 kilometers from San Cristóbal de las Casas.

Shotgun shells, assault rifles, and pistols were scattered throughout more than a kilometer of the San José El Carmen community, as witnesses of the skirmish between federal and state forces, to repel the attack of the armed group that clashed for more than 120 minutes.

Two vans of the Municipal Police of Pantelhó were left in the middle of the road completely burned and in the surroundings, members of the armed group felled trees and placed barricades on Thursday, while the National Guard, Army, and Police were in the municipal seat, where They arrived alerted because antagonistic groups had collided on Wednesday.

This afternoon the road between Pantelhó and Chenalhó was released after more than two hours of work by the forces that maintain control of the area. With the help of chainsaws and ropes, they managed to cut and drag the logs that blocked the passage of the vehicles.

But despite the presence of the military and police in the area, public transport has suspended the runs between Pantelhó and San Cristóbal de las Casas.

On Thursday morning, the convoy of the Mixed Operations Bases that was in the municipal seat made up of some 300 elements, tried to make a tour of the area where the armed groups had clashed, but upon entering the area, they were ambushed and the attack lasted more than two hours.

He explains that the members of the armed group were located among the coffee plantations, from the early hours of Thursday, from where they ambushed the federal and state forces. Under the trees, you can still see empty cartridges, bags of oral serum, soft drinks, and bottles with pozol that the Tzotziles consumed.

After two hours of confrontation, the military and police managed to leave the area, to retreat to the municipal seat, from where the wounded were taken by air to Tuxtla, in a 15-minute flight.

This morning, a helicopter from the VII Military Region flew over the communities of Pantelhó and Chenalhó and minutes later the soldiers entered the road where the members of the armed group were. The soldiers and police officers appeared fearful after being surprised by the armed group.

But before noon, the security forces had toured the coffee plantations where the members of the armed group took shelter, and in a community in Chenalhó, they found some weapons used by the armed groups, but the number and characteristics are not officially known.

The towns between Chenalhó and Pantelhó are practically desolate, with houses where only dogs and poultry have remained, while their inhabitants have fled to the Acteal community, where 225 Tzotziles, Yacteclum, Chenalhó and San Cristóbal de las Casas have taken refuge. in Catholic and Evangelical churches and auditoriums.

In Pantelhó, businesses, medical offices, and the market have been closed since Wednesday, but the inhabitants do not even go home. Only a group of men is in the park, where the Army, the National Guard, and the State Police maintain their operations center, but in the surroundings, the uniformed men have also established surveillance points such as the one located in the cemetery.

A woman from San José El Carmen cried with joy when she saw the security forces patrols that passed in front of her house. She, her husband and five more of her relatives took refuge in a room since Wednesday night and it was until Thursday afternoon that they managed to leave, when hostilities had ceased.

Miguel López, the head of the family says that when they heard the first shots from firearms, they did not feel like fleeing, because if they went to the ravine behind their house, they could be confused, but if they went up to the hills that They are in front of them, they couldn’t do it either, because the armed Tzotziles were sheltered there.

On Thursday afternoon, the families of San José del Carmen managed to congregate and see that there were no injuries and after eating beans, tortillas and coffee, they returned to take refuge in their homes.

Before the ambush occurred, Manuel Pérez Pérez, 83 years old, his wife Marta López Díaz, 70 years old, their daughters-in-law and their granddaughters walked two hours from Quextic, towards Acteal, to seek refuge because they feared that the bombs and the bullets that rang out in front of his house.

This man, who in 1997, his son Manuel Pérez López, then six years old, was injured when he was shot in the left knee with a firearm, said that the clashes that occurred between Wednesday and Thursday in the limits of Acteal and Pantelhó, rekindled memories of the massacre 24 years ago in which 45 Tzotziles died.

As the National Guard, Army and Police clear the road at around 4:00 p.m. on Friday, two girls made their way among the uniformed men, both with two packages on their backs and later a woman was led by her daughter to seek refuge in a community in Chenalhó. “We are afraid,” says the blind as a fine rain begins to fall in the area.

Faced with the ineffectiveness of the three orders of government, the residents organized to confront the criminal group that plagues the region. They are called Defensores del Pueblo, but they are located as “Los Ciriles”

The violence caused by drug trafficking continues to conquer territories in Mexico and forces thousands of people to move from their place of origin to avoid threats, attacks and even death.

Chiapas, a state in the south of the country, has been the victim of these attacks by criminal organizations dedicated to the commercialization of drugs, and in recent weeks, the Tsotsil Pantelhó-Chenalhó region has been practically abandoned to stop living in this situation .

According to the Fray Bartolomé de Las Casas Center for Human Rights, AC (Frayba), around 2,000 people have been displaced by the generalized violence of organized crime and the failure of the Mexican State to address the situation.

This association has obtained documents that indicate the presence of a criminal group in the municipality of Pantelhó, which acts in complicity with the City Council to form part of the municipal power structures, currently linked to the Party of the Democratic Revolution (PRD).

Some of the issues that the residents of this region have suffered have been checkpoints, blockades and incursions by the criminal group, in the company of elements of the municipal and state police.

There are also testimonies about members of this drug cell who use official vehicles of the National Guard to move freely through the streets.

“We know that residents of at least 19 communities in the municipalities of Pantelhó, Simojovel and Chenalhó are at a maximum level of risk. Men, women, girls, boys, adolescents, and older adults live in fear and terror due to the threat they have received from people linked to crime groups. The lives of those who report it are at risk, ”explained the Frayba center.

So far there have been operations of the Sinaloa Cartel, which has full control of the border with Guatemala; the Jalisco Nueva Generación Cartel (CJNG), which extends to the southwestern coast; and the Gulf Cartel, with a small strip of power that stretches from the Pacific to the border with Oaxaca and the southern part of Veracruz.

This struggle to obtain the Chiapas square would be the trigger for the violence and forced displacement of the inhabitants of Pantelhó, as they would seek to eliminate their enemies without measuring the force of fire or if there is an innocent person involved.

Through different sources consulted by the Frayba center, it was confirmed that so far this year, 12 people have been murdered in this municipality, including a child. There are also records of a missing person, as well as an injured woman and child, from March 12 to date.

One of the events that caused the most stir at the national level was on July 5, when they assassinated Simón Pedro Pérez López, Maya Tsotsil, community human rights defender, catechist and former president of the Board of Directors of the Civil Society Organization of Las Abejas from Acteal, members of the National Indigenous Congress.

The main request is that the government of Chiapas do something, since it is fully aware of these situations, however, so far it has not acted to protect the life, integrity, and personal safety of the population.

The Defenders of the People, known as “Ciriles”, are those who confront the criminal cell that plagues Pantelhó (Photo: Fray Bartolomé de Las Casas Human Rights Center, AC)

“In various municipalities, there is a vacuum of authority, violence and impunity prevail and the government reduces the serious situation to inter-community conflicts that only denote state racism. In this way, the criminal activity of criminal groups linked increasingly and clearly to political parties, and public officials of the three levels of government has allowed the power of these groups to prevail and have territorial control over the population. through terror, assassinations, disappearance, robbery, dispossession and forced displacement, carrying arms and explosives for the exclusive use of the Mexican Army ”, denounced the Center for Human Rights.

Despite the fact that the Chiapas State Attorney General’s Office (FGE) has received multiple complaints, and that the Diocese of San Cristóbal de Las Casas has also ruled on the matter, the change is null, and the exhaustion begins to be reflected in people, who prefer to escape so as not to die.

Due to this ineffectiveness of the municipal, state and federal authorities, the residents organized to defend themselves. They are called Defensores del Pueblo, but the press baptized them as “ Ciriles ”, and they have even been linked to the CJNG.

According to Frayba, this group was the cause of the violent day in Pantelhó registered on July 7 and 8 in the municipal seat, but it was because they defended the residents of the region from the criminal group that, for approximately six years, has grown in power based on the governments’ institutional impunity pacts, coupled with the complicity and omission of the State.