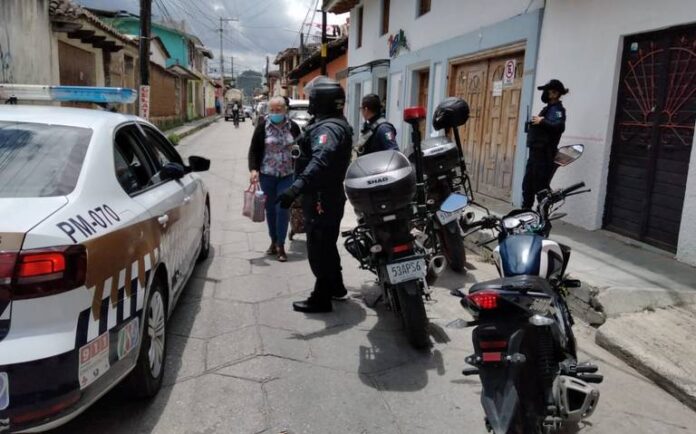 San Cristóbal de Las Casas.- A male subject was threatened by two subjects on a motorcycle and with a short firearm, and the amount of 256 thousand pesos was stolen from him, after leaving for a bank branch in the center of the city.

Víctor Iván “N”, a worker in a repair shop, was walking on Clemente Robles street between Crescencio Rosas from the San Antonio neighborhood, of the Apache Parts and Service Company, when two subjects got off a Green Motorcycle, one wearing a black helmet with a red and stripped him of the cash.

According to the municipal police, the events occurred as a result that at noon this Friday as the subject was walking from Boulevard Juan Sabines, in the San Antonio neighborhood, to a bank branch located in Plaza 31 de Marzo, from the downtown area of ​​San Cristóbal de Las Casas.

According to the police report, the events were recorded around 12:30 pm this Friday, after the victim had left the establishment where he works to go to deposit a large amount of money that he brought in a black backpack when he was walking on Álvaro Obregón Street, two men, onboard a motorcycle, met him, from which one of them got out and threatened with a firearm, snatching cash, a cell phone, and his wallet, boarding again and on the run in an unknown direction.

At that time, the victim contacted the emergency numbers to request the presence of elements of the Municipal Police Directorate, who went to the scene of the events, locating it next to the municipal Baseball Stadium, where they received attention. Immediate to present the corresponding complaint before the Altos District Attorney’s Office for the crime of robbery with violence and those that result.

At the same time, based on the description provided by the C5 San Cristóbal cameras about the alleged aggressors, the Municipal Police deployed a search operation with the support of motorized personnel and patrols throughout the area, however, due to the margin in which they were registered. the facts and the time in which the victim went to the reactionary where he works to report what happened to the emergency numbers, it has not been possible to locate the people involved in this crime.