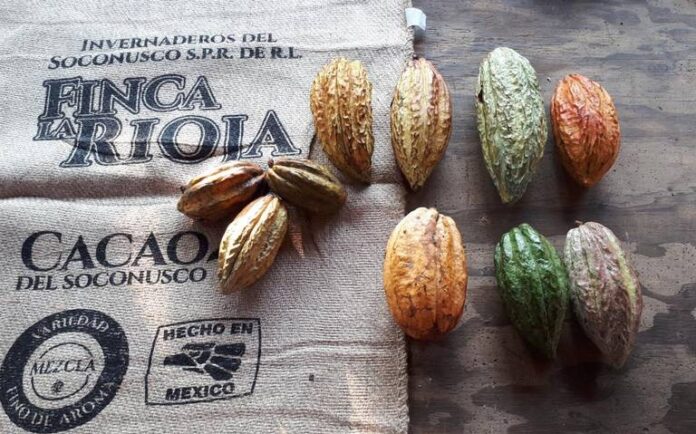 Finca La Rioja, in the municipality of Cacahoatán in the Soconusco region of the State of Chiapas, was classified as one of the 50 best

San Cristóbal de Las Casas.- On July 23, it was announced that the Mexican sample from the La Rioja farm, in the municipality of Cacahoatán in the Soconusco region of the State of Chiapas, was classified as one of the 50 best cocoas in the world.

The summit event to qualify the quality of the world’s cocoas is the “ Cocoa of Excellence ” contest, organized every two years by the Biodiversity International entities and the International Center for Tropical Agriculture with headquarters in Rome and Paris respectively.

In the 2021 edition, 235 samples of cocoa beans from 53 countries in the world participated, where they were previously selected by national committees.

This event, which brings together the main experts in sensory evaluation of the world chocolate industry is part of an international program that values ​​the quality of harvests and rewards producers, recognizing the work of cocoa farmers, celebrating the diversity of flavors, smells, and in general, the quality of cocoa according to its production areas.

Cocoa is currently produced mainly in African countries, where more than 50% of world production is harvested, in Latin American countries such as Brazil, Peru, Colombia, Venezuela, and Ecuador also stand out for the quantities produced. The participation of cacao producers from Chiapas seeks to position Mexico as a producer of Cacao of Excellence and high quality. 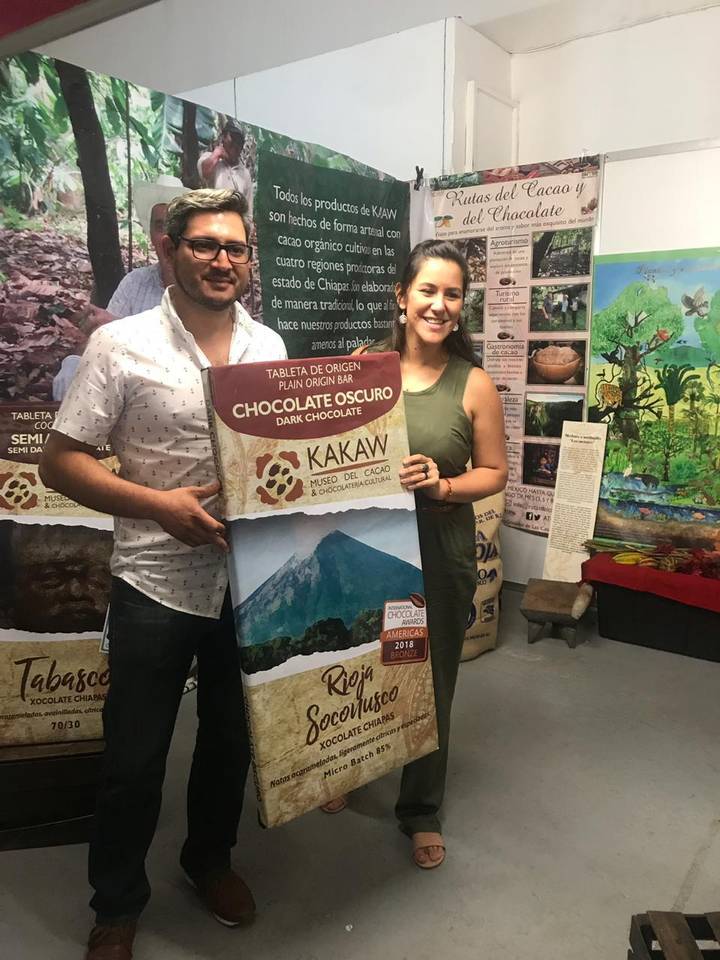 This event, which brings together the leading experts in sensory evaluation from the world chocolate industry, is part of an international program.

Finca La Rioja, who for the second time manages to place itself on the top of the world’s cocoas, by José María Pascasio Muñoz is located 500 meters above sea level in one of the historic municipalities that are recognized as the cradle of cocoa cultivated for thousands of years.

Due to its altitude and volcanic soils, this plantation is located in one of the best niches for the production of the recognized and valued “Fine Aroma Cacao”.

The original farm dates back a hundred years, when Mr. Moisés Muguerza Gutiérrez established a 500-hectare plantation of white Creole cocoas that later spread to other plantations in Chiapas and Tabasco, a situation recognized by Presidents Abelardo Rodríguez and Lázaro Cárdenas. 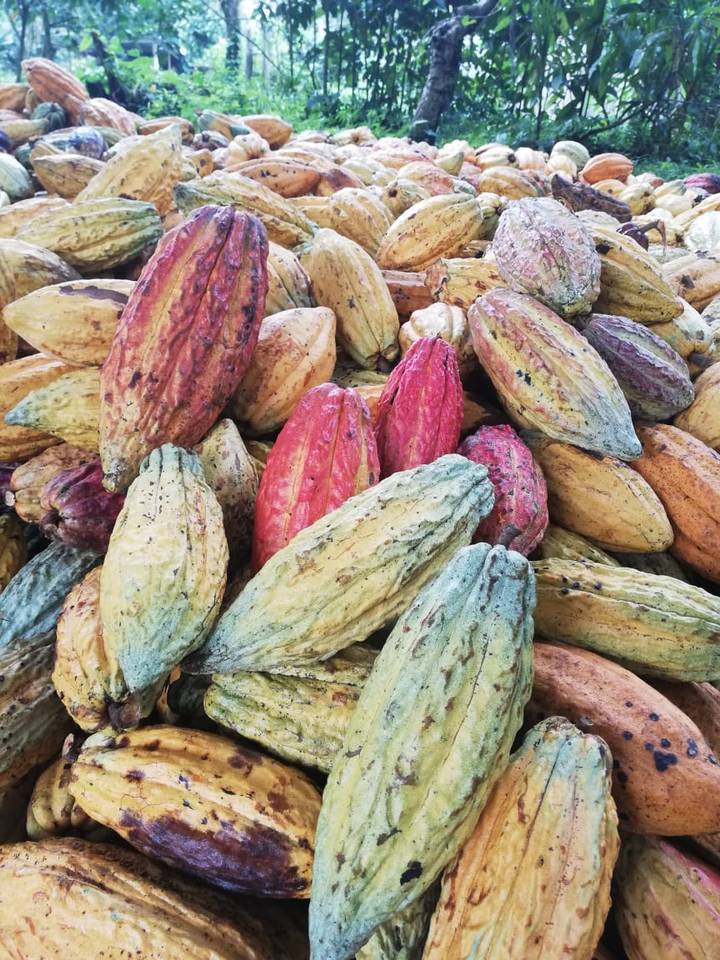 At present, the line of work is maintained and preserved with the new generations.

In relation to this award, Herbert Castellanos, co-director of the Kakaw Museo del Cacao in San Cristóbal de Las Casas, tells us that after many years of abandonment to the cocoa field by the Government authorities, it is the same cocoa farmers who seek to win nationally and internationally a better positioning of Mexican cocoa, which is already recognized as the cocoa of origin, since botanical and anthropological studies show that this crop has 12 thousand years of development in Soconusco.

What is the Difference Between Cacao and Cocoa?

THE RESULT OF THE TRANSLATION

The word “cacao” is used more and more in the world of fine chocolate. But “cocoa” is the standard English word for the processed parts of the Theobroma cacao plant. In the UK and other English-speaking regions of the world, it is also often used to refer to a hot chocolate-based drink.

You’re confused? Let’s see why we have two words and how they are used.

Often the word “cacao” is explained simply as a loan from Nahuatl, a group of indigenous languages ​​native to central Mexico and used by the Aztec people. When the Spanish colonizers arrived in the mid-16th century, they took the word kakawatl, which refers to the cocoa pod, and adapted it to cocoa.

But apparently, the Aztecs borrowed this word from other indigenous languages. There is evidence indicating that as early as the 4th century AD. C. there was a term for cocoa.

The word “chocolate” has a similar story. It also came to English through the Spanish colonizers, who adapted an indigenous word: xocoatl. It is debated whether the word was in Nahuatl or Mayan. Chocolatl supposedly does not appear in colonial sources in central Mexico, supporting the theory that the term’s origin is not in Nahuatl. Regardless of its provenance, this word is thought to refer to a bitter cocoa drink.

A bag of Venezuelan cocoa beans.

INCORRECT PRONUNCIATION OR AN EDITING ERROR?

So how do we get from cocoa to cocoa?

Sharon Terenzi writes about chocolate in The Chocolate Journalist. She tells me that she understands that “the original difference between [the words] cocoa and cacao was simply linguistic. Cacao was the term in Spanish, cocoa was the term in English. As simple as that. Why? Because the English conquerors could not pronounce the word cacao well, so they pronounced it as cocoa ”.

According to legend, in 1775, Samuel Johnson’s dictionary, which was enormously influential, confused the entries “coco” and “cacao” resulting in “cocoa” and the term took root in the English language.

Either only one of the two versions is absolutely accurate, or both are, the English-speaking world adopted cocoa as the word to refer to the product of the cacao tree.

THE CURRENT MEANING OF “CACAO”

Spencer Hyman, one of the founders of Cocoa Runners, explains what, according to him, the difference between cacao and cocoa is. “Usually the definition is… when [the pod] is still on the tree, it is normally called cacao. And when it is no longer on the tree, it is called cocoa ”. But he cautions that it is not an official definition.

Others broaden the interpretation and use “cacao” for anything prior to processing and “cocoa” for processed ingredients.

Megan Giller writes about fine chocolate in Chocolate Noise, and is the author of Bean-to-Bar Chocolate: America’s Craft Chocolate Revolution. She said: “Something happened in translation at some point when we started using the word cocoa for what you have after a certain degree of processing of the product. I call it a cocoa tree and a cocoa plant and cocoa beans before fermentation and drying, then it changes to cocoa ”.

Sharon has a different take on this issue: “I have yet to find a professional in the chocolate industry who can tell the difference between the two terms. No one will tell you ‘oh no, you are talking about raw beans, so you should use the word cacao, not cocoa!’ Regardless of whether it is processed or not, you can use the two terms interchangeably ”.

While we see cocoa written on chocolate bar labels and ingredient lists in English-speaking countries, these products do not contain raw beans. It is increasingly common to see chocolate bars and drinks that are marketed as healthy, natural or raw with the word “cocoa”, even though they are processed.

Megan says: “I think the word cacao is useful to contextualize that you are referring to something raw or at the stage where it is still on the farm. But I think in general it is used completely incorrectly. You would never find [for sale in a store] nibs (or chunks) of cocoa that are actually raw.

IS THE DUTCH PROSECUTION TO BE RESPONSIBLE FOR THE CONFUSION?

In North America, it’s better known as hot chocolate, but in much of the English-speaking world cocoa also refers to a hot, sweet, milk-based drink made with cocoa powder.

Many cocoa powder manufacturers traditionally made this ingredient using Dutch processing. This technique alkalizes the cocoa powder. Megan explains her story to me.

“When you separate the chocolate powder and butter from the chocolate liqueur, the powder is still bitter and does not mix easily with the water. So [in the 19th century] someone came up with a way to treat dust with alkali. The powder becomes darker and less bitter. Its flavor also becomes more uniform. And it helps to make it easier to mix it with water. “

This explains why some manufacturers choose to move away from the Dutch processing method: it removes some of the flavors notes that people praise from artisan chocolate.

A can of cocoa processed with method ho Landais.

” We started using the word to refer to cocoa cocoa processed with the method ho Landais, ” says Megan. “So now cocoa is in a way a lesser-known word in English, so it implies that [a product labeled ‘cocoa’] is different.”

In this case, the implication is that the powder labeled “cocoa” is noticeably better in terms of taste and wholesomeness than a hol andés processed version labeled “cocoa.” But is it really so?

“In general, chocolate is a treat,” Megan continues. “It makes you feel good and it tastes good, but it is not something you eat for health. Natural powder is not much healthier than the processed method ho Landais. You lose flavor and antioxidant notes at every stage. Natural cocoa powder [only] is less dust processed under processing ho Landais “.

CACAO AND COCOA IN LATIN AMERICA

Do these debates extend to the Spanish-speaking world?

Ricardo Trillos is the owner of Cao Chocolates. He tells me that, based on all his travels through Latin America, “cacao” is always used to refer to the tree and the pods, as well as all products made from the bean. But it also tells me that there are subtle differences between Spanish-speaking countries.

He tells me that in the Dominican Republic, balls are made of chocolate liquor mixed with ingredients like cinnamon and sugar, and these are also called cocoa. In addition, he says that in Mexico there is the same thing, but there it is called chocolate (it is what is used to prepare mole, for example).

Sharon says that in Latin America “they only use the term cacao and consider cocoa as the equivalent in English.”

THERE ARE NO DEFINITIVE ANSWERS

There is no clear answer about the difference between cacao and cocoa. The language changes with trends and with the passage of time and there are regional differences. Even in the chocolate industry, there are different opinions on when cocoa turns cocoa, if at all.

But Spencer tells me that “when you see cocoa on a label it should be a red flag” and that “you should ask what the manufacturer is trying to do.”

Megan says: “I think the bottom line is that everyone uses those two words differently, so it’s very difficult to know what they mean when you see them. But I believe that, as consumers, it is important to investigate and know what you are buying and what you are consuming. Some people don’t even know the difference. “

So before you commit to only consuming cocoa or avoiding cocoa, be sure to take a look at the ingredient list and try to understand how the manufacturer processed the components.