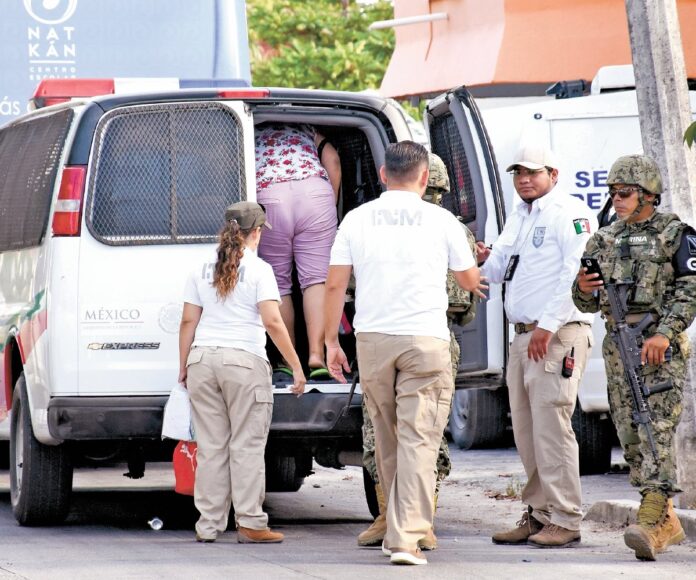 For the last few months, there have been increasing reports of tourists—and even temporal or permanent residents!—being detained while the status of their visa is confirmed.

We recommend that you carry your FMM, Temporal, or Permanente Visa on you at all times, as well as a form of legal identification such as your passport. Though we haven’t heard many accounts of people being stopped in their own cities, it’s probably a good idea to at least carry around a copy of your documentation with you to avoid any issue.

It’s especially important that you carry these documents with you when you are traveling throughout Mexico because these checks are most common at bus stations and while en route to other destinations.

If you cross the United States/Mexico border by land, then you need to actively seek out your FMM visa. It’s not handed to you at the border, and you will need it if you plan to travel more than 20 kilometers from the border crossing.

Below Is the Response from the Us Embassy on This Issue:

U.S. citizens are reminded that if you enter Mexico by land and plan to travel beyond the immediate border area you must stop at a National Migration Institute (INM) office to obtain an entry permit (Forma Migratoria Multiple, or FMM), even if not explicitly directed to do so by Mexican officials.

When traveling in Mexico, the law requires that foreign visitors carry a passport and entry permit. You may be asked to present these documents at any point. If you do not present these documents, immigration authorities may lawfully detain you for up to 60 days while they review your immigration status. Immigration checkpoints are common in the interior of Mexico, including in popular tourist areas far from the border.

U.S. Citizens resident in Mexico should carry their resident identification cards at all times.

Canadian Daniel Maté says officials treated him badly, but refugees from other nations had it worse

Maté wrote in a thread of posts on Twitter:

“Hi. This thread is about an ordeal I just [had] in the Mexican immigration system. It’s about my experience, but it’s more about what’s going on for the hundreds of men from Haiti, Ecuador, Guatemala, Honduras, Nicaragua, Colombia and elsewhere still locked up there.”

“I was released yesterday from the notorious Las Ajugas federal immigration detention center in Mexico City after 24 days incarcerated, run by @INAMI_Mx [Mexico’s National Immigration Institute],” Maté tweeted. “My crime was an expired (by two months) tourist visa. I was deported, blessedly, back to Canada.”

In his posts, Maté went on to detail his experience in detention, which was extended when he contracted COVID-19 and was required to quarantine. This infection, he said, was “highly probable” considering that testing did not occur when he entered detention in Las Ajugas, that there is overcrowding and mask-wearing is only “loosely enforced.”

The rights of prisoners to services like translation, making complaints and lawyers are advertised on posters around the facility, he wrote. “But nearly all of them were denied to us.”

In quarantine, Maté was locked 24 hours a day in a tiny area with up to 22 other men. The men were attended once, very briefly, by a doctor and otherwise left with “little ventilation and no outdoor time for 13 of the 15 days,” he wrote.

Maté marveled at the kindness and resilience shown by those with whom he was detained.

Maté also wrote that he was poorly treated, but that it was much worse, for example, for Haitian prisoners who were “particular recipients of contempt and neglect.”

FacebookEmbassy of Canada to Mexico

Planning a Trip to Chiapas?