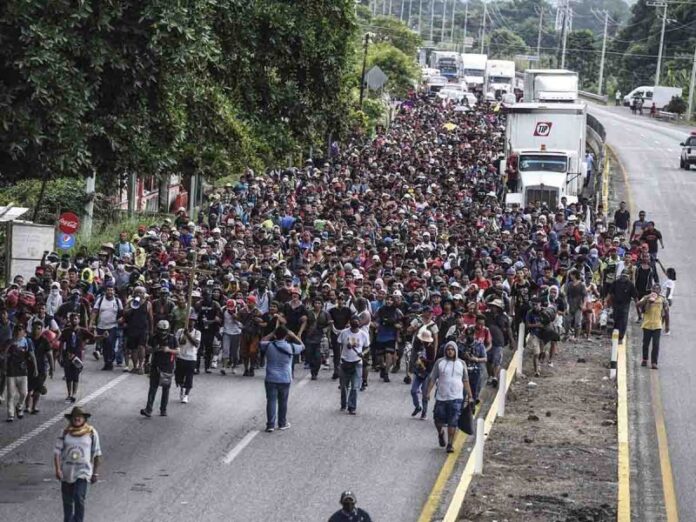 VILLA COMALTITLAN, CHIAPAS (AP) — A growing migrant caravan filled the square in this town in Chiapas state on Wednesday, October 27th, after knocking off another 13 miles of its trek across southern Mexico.

About 2,000 migrants had walked out of the southern city of Tapachula near the Guatemala border on Saturday. While the multitude is challenging to count, it appeared significantly larger when it left Huixtla after a day of rest and its leaders estimated its size at 4,000. It reached the town of Villa Comaltitlan on Wednesday.

“The caravan is like a magnet, it goes sucking up more people, migrants who had been in the towns (of coastal Chiapas) are joining,” said Irineo Mújica, an immigration activist with the organization People without Borders.

One of them was Bayron Zavala, a Nicaraguan migrant, who hearing that the caravan was advancing slowly, got on a bicycle and caught up with them in Huixtla. He said he would walk with them “as far as God gives us the strength … if possible, continue to the United States.”

Without any issue, the migrants passed a customs, immigration, and military checkpoint where authorities typically seize drugs and look for human smugglers.

Though still significantly smaller than caravans in 2018 and 2019, this is the biggest group moving through southern Mexico since the pandemic started early last year. In January, a caravan left Honduras, but authorities in Guatemala broke it up.

Other groups that have walked out of Tapachula this year have numbered in the hundreds. All were dissolved by Mexican authorities, sometimes with excessive force. Those groups were composed mostly of Haitian migrants. This caravan is primarily made up of Central Americans.

The National Guard has not tried to intervene since it attempted to keep the migrants from Tapachula on Saturday. There were scuffles and a child was injured.

Mexico has deployed thousands of soldiers, police, and immigration agents in the south, and in recent years no large groups have made it out of the states bordering Guatemala.

Even so, entire families keep trying. Cristina Romero wants to make it to the United States to seek treatment for her 12-year-old son who suffers from a developmental delay.

Romero had applied for asylum in Mexico, but after waiting four months the answer came back negative. “They told me I could appeal the case, but that it could come out the same,” she said. “Then I heard about this caravan and I was up for coming.”