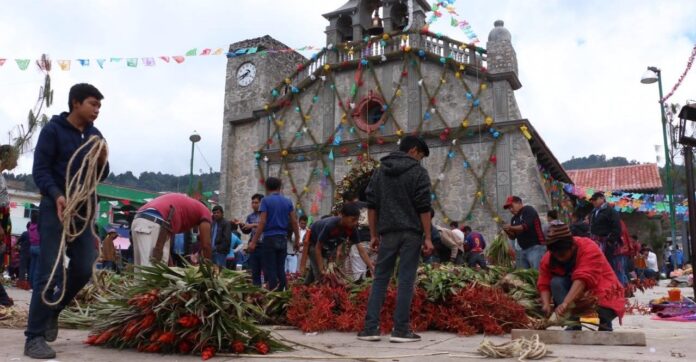 Chiapas is a state with such an authentic personality that you simply cannot expect to find the same as elsewhere and the December holidays are no exception. It could be said that Chiapas is the least Catholic territory in all of Mexico, as a result of complex regional history and with Christmas being a predominantly Catholic holiday, since the celebrations are somewhat different in deep Chiapas, where it is lived according to tradition and in The one that these events are not crowded fairs, but activities carried out out of devotion according to their uses and customs.

The men carry ears of corn and the women carry a jicalpestle with flowers, beans, cocoa and some coins. It is up to them to build “the little house” with wooden poles, with walls and roof covered with dried banana leaves, inside they place a “canoe” (hollowed out trunk) full of earth, with a hill at one end, symbolizing the Mactumatzá hill. . Then the ears are shelled. The women go to the altar where they receive a container with corn and beans, cola onions, chayotes, radishes, flowers, and a candle. Accompanied by traditional music, they enter the little house, and inside the men throw water on the walls and roof of the rustic little house, symbolizing rain that fertilizes the plants, seeds and women. Then it is the men’s turn and they perform the same action. When leaving they are served a jicarita of liquor, hot coffee or both to remove the cold and close the door so that the seeds germinate in the semi-darkness. The priostes dance the namanama etzé (little dance) to finish the ritual.

This day the “birth” is armed, a mixture of indigenous and Catholic rituals, with a metallic armor and a gabled roof, which is covered with salzacate (a kind of thick straw) tied with ribbons painted in yellow, red, purple, green and natural. Straw placed on an elaborate mesh ensartas of siempreviva dwelling, previously boiled. And it is secured with wooden rods lined with totomoste (joloche or bender) painted in the same way, which remind us of the colors of the pre-Hispanic directions and corn. At night the Shepherds visit, the only dance that has a song written in Spanish, Latin and Zoque. It is accompanied with string music (jarana, guitar and previously violin). At the end, the pucnonó is served, a new corn atol, sprinkled with ground pumpkin seeds.

3.- Born and Seated of the Children of Bethlehem: December 24

On the 24th they take out the “sowing”, and it is here when they perform the divinatory ritual since, depending on how the cornfields have grown, it will be the forecast for the next harvest. So we know “if the cornfield is small and sparse, it means there will be a drought; if it is yellowish, there will be a plague. If it grew crooked or fallen there will be many gales or if its roots are rotting, there will be too much rain or flooding. But if it is found green and its stem is strong, it means that there will be a good harvest. ” The armada of the nativity scene is also carried out with traditional images, pashte, flowers, flowered candles, somé, even modern Christmas lights; placing the “sow” in front.

4.- Disarming of the Bethlehem: January 6

This is held on January 6 to lower the somé, undo the little house and the nativity scene, although a special ceremony is held to clean the canoe: the executor hides the bull among the cornfield, saying that it has been lost; Call the priostes to look for it, say what color it is or if they know it is the owner. They pretend to look for it among the plants and even if you look at it with the naked eye, they say they can’t find it, as it would be equivalent to paying a fine to buy “the water” (beers and soft drinks). So several go by, until one of them finds it and designates another as the owner of the animal, who will pay for the damage caused in the milpa. Then they perform the Torito dance, as a supposed bullfight, where the bull-man tries to go goring them and they give passes with bandanas. While another man carries a dove in his hands that pretends to peck all the time. At the end of the dance, the figures are kept and the Little Children remain in their dressing room, while the assistants collect the salzacate, immortelle skewers, cornfields and somé bread to distribute as relics. Finally all cooperate to celebrate the end of the festivities.

The tradition of the vase child – Chiapa de Corzo

The tradition of the “Flower Boy”, a devotion in which faith is everything, as old as the people themselves, the 8-day journey to the highlands of Chiapas to go to the flower called Niluyarilu, which is nothing more than the flower of the child God, is the preamble to the Christmas festivities since this flower is used to make the birth of the child Jesus in the temple of Santo Domingo de Guzmán ”.

Acala located in the Central Region of the state has a peculiar tradition known as “The Pilgrimage of the Bringing of the Flower of the Child God”. This tradition is based on a religious syncretism, motivated by a ritual atavism that consists of a series of religious actions that begin on December 15 at night with the farewell of a group of men of different ages (known as Vases) and culminates in the December 25 with the birth of the Children of God in the main church of the town. During this period, the group began a painful pilgrimage on foot from Acala to San Cristóbal de Las Casas in the Altos de Chiapas region in search of the flower called Niluyarilu, which is a bromeliad of tall pines and oaks, which later carried meccapal, by the dozen, back to their village.

It is important to mention that the group, accustomed to living in hot lands, goes through hardships due to the strong cold that is felt in these cold lands; however, this represents the mysticism that the pilgrims manifest towards the Child God. Even with all the vicissitudes it faces, the group achieves its objective, which is to collect the red flowers and begin its pilgrimage to its town, crossing mountains and valleys, spending the night in some places to rest and continuing at dawn until to reach the place where a whole town awaits them. The red flowers collected by the group will be used to build “La Casita” where the Christ Child will be born in the main church of the town, but not before taking a walk with the little house through the main streets of the town together with the inhabitants of the place.