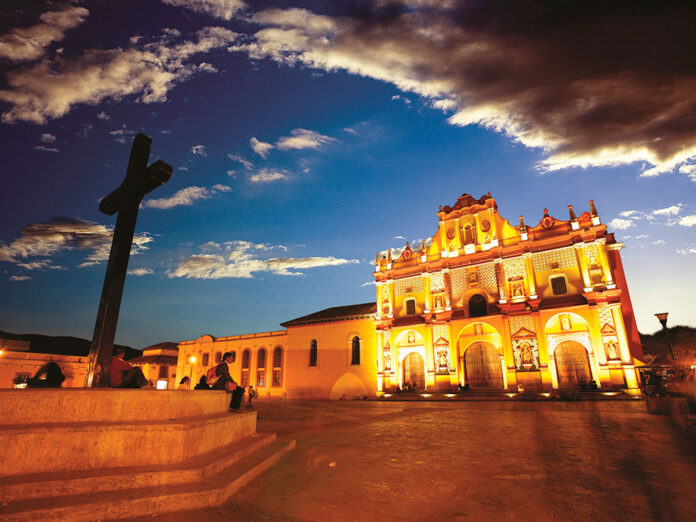 Linked to the religious celebrations of Holy Week and also to the beginning of spring, in April of each year in San Cristóbal de Las Casas the Spring and Peace Fair is held, a celebration considered the most important in the town. The main festival of San Cristóbal de Las Casas had its first broadcast in 1868, so it currently has been celebrated for 150 consecutive years without interruption. When spring arrives, those who visit the colonial city will be able to enjoy 8 days of the festival.

During the 8 days of the fair, different activities are carried out, since it becomes the most important showcase for artisans, businessmen, musicians, athletes, merchants, among others. It is the maximum traditional celebration of the coletos, named that is given to the native people of San Cristóbal de Las Casas.

What should you not miss at the Spring and Peace Fair? Being a tradition that has a religious bond, the burning of Judas is the initial flag to inaugurate the celebrations and activities that will take place throughout the fair. The burning of Judas is represented by figurines created by pyrotechnic artists from the region, according to the creativity with which they are made, the first three places are awarded. At the end of the exhibition, the figures with different representations are burned, and in this way, the Spring and Peace Fair begins. After the traditional burning of the Judas, it is time to crown the Queen of Spring, which is usually done at the Central Park Kiosk, a place where Mariachis sing a beautiful serenade celebrating the chosen Queen as a worthy representative of queen-tailed beauty. .

During the celebrations different events are held, there are artistic, bullfights, sports: soccer, basketball, cycling, wrestling, boxing, mixed martial arts, weightlifting, etc., cultural, musical, fashion shows, and allegorical cars. rides, trade shows, singing contests, concerts at the fair’s mass, also known as the village theater, with national and international artists, the traditional Meal of Remembrance, which is generally very expensive and It is because the guests, in addition to the food, enjoy some artist of the moment. The Spring and Peace Fair is an event full of magic, but it also recalls childhood and rescues the games and traditional culture of the Coleto people.

The Historic Center of San Cristóbal de las Casas is the venue for workshops where you learn to make kites, piñatas, play instruments such as the marimba, guitar, as well as various activities such as skill games such as lottery, chess. , memory games, carom, among others. At night it opens its doors to musical events of marimba, trios, danzón, and mariachis.

The National Folklore Festival is also held during the Fiesta Mayor of San Cristóbal de Las Casas, more than 10 states of the Mexican Republic participate in it, if within your plans is to admire different regional dances of Mexico, without a doubt You will have to visit this Magical Town during the 8 days of festivities. Fun, joy, family party, regional Mexican cuisine, mechanical and traditional games,