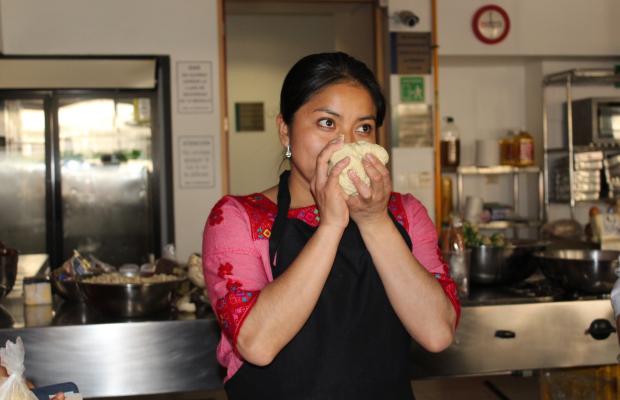 The inaugural 50 Next lists is comprised of individuals identified as next-generation leaders in the gastronomic arena. Claudia Ruíz was considered among 700 candidates from a pool of applications, nominations, and talents selected directly by the Basque Culinary Center.

Claudia Albertina Ruíz is on the list in the ‘Hospitality Pioneers’ branch, along with other young people under 35 who come from 34 countries across six continents. She was not only the first indigenous Tzotzil to graduate from the Bachelor of Gastronomy at the University of Sciences and Arts of Chiapas, but she was also the first to publish a thesis in a mother tongue.

Once she graduated, she went to Mexico City to work at Pujol and Máximo Bistrot, owned by chefs Enrique Olvera and Eduardo García respectively.

Later she returned to San Cristóbal de las Casas to open two of her own projects: Kokono ‘and Albertina.

“I was fortunate to spend a week with Claudia Albertina in her town in Chiapas,” declares chef René Redzepi about her inclusion on the list. ‘I was impressed by her willpower, her knowledge of food, and her instinct about the role of food in all branches of life and society. She is a role model for people who find it difficult to even dare to dream, even hope that dream will become a reality. She has proven that this is possible, and perhaps now more than ever, we need people with indigenous origins to have a platform to share their ancestral knowledge and skills with the world. ‘

Beyond serving delicious, traditional Chiapas dishes like soup of chipilín, a Mexican legume, the chef fulfils her mission to promote indigenous culture on several levels. At Kokonó, she provides young indigenous people with training, skills and jobs, while supporting local producers and educating customers on the origin and value of each dish. In a male-dominated industry where prejudice against indigenous communities still exists, Claudia Albertina also speaks out against sexism, racism and stereotypes. She is an active promoter of the Slow Food movement, which links the pleasure of food with a commitment to the community and the environment.

As she works towards a world where all cultures are valued equally, Claudia Albertina is in the process of setting up an association to help the vulnerable, as well as a soup kitchen to feed those in need. “Values, family, love of art, respect for others and, above all, the acceptance of individuals regardless of their origin, are all present in our space,” she says. “That is why we not only cook, but also educate – and it is an education based on professionalism, but at the same time a more humane one.”

“We want to empower and inspire the next generation to achieve their dreams without forgetting their roots.” – Claudia Albertina Ruiz Sántiz